NEW YORK, United States — When Flavio Girolami and Peter Poopat started Common Projects just over a decade ago, they had no idea their desire to create the perfect sneaker would bloom into a cult brand with annual revenues of “roughly $10 million.” Of course, that’s a tiny fraction of the global sneaker market, worth around $55 billion, according to sports industry news site SportsOneSource. But by carving out a unique lane in the space between athletic shoes and luxury footwear, Common Projects became the gold standard in a contemporary sneaker market they helped to create.

The opportunity has not been lost on newcomer sneaker brands, such as ETQ Amsterdam, Filling Pieces, Axel Arigato and Greats, which now offer similar silhouettes for consumers looking for fashionable, minimalist sneakers. And since they can’t compete on provenance, they compete on price. While the retail price of Common Projects’ original low-top leather sneaker, the Achilles, hovers around $400, Axel Arigato’s similar Low Sneaker starts at $180 and Greats’ the Royale, ​made in a factory in Marche, Italy, the same region in which Common Projects manufactures its products, starts at $159. 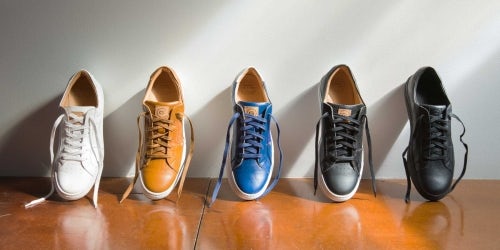 “That’s where the opportunity is. If you can make superior quality stuff at a value price, that’s what people want,” says Ryan Babenzien, who founded Greats in 2013. “Everybody wants the best they can get for the best price. Smart guys don’t want to overpay. People who want to buy status — that’s another thing.”

Babenzien doesn’t see Greats as a mid-tier brand, however; rather a direct competitor to luxury labels. The price may be lower, but he says his sneakers are every bit as good as those offered by the competition. He is able to control prices by eschewing traditional wholesale distribution, although strategic retail partnerships with stores like Steven Alan and Mr Porter help broaden the brand’s reach and raise customer awareness. Instead of stocking third-party merchandise that fits within the Greats lifestyle, it chooses to sit amongst its competitors on the shelves. As a result, Greats is one of the fastest selling brands on Mr Porter — the e-commerce retailer’s first order “sold through very quickly,” says Babenzien.

Greats is also experimenting with its own brick-and-mortar shops, like its Field House location near the company’s Williamsburg, Brooklyn headquarters. But so far, retail sales have been negligible compared to e-commerce. “What we do in a month at retail we do in two days online,” says Babenzien. Though he declined to provide specific numbers, he says revenue is grew “thousands of percent past last year.”

Sam Lobban, buying manager at Mr Porter, attributes the success of Greats to the right price-to-quality ratio. “Greats pitches a $400 product for $150. I’d imagine that’s why consumers buy into that,” he says. And Mr Porter has broadened its sneaker offering accordingly. “If you go back four seasons ago, the offer was far more succinct. Our offer was very much Valentino, Lanvin, Margiela and, outside of that, maybe Common Projects,” says Lobban. “We now have quite a wide selection, but it’s more a reflection of the market and demand.”

Shoes now account for about 23 percent of the overall Mr Porter business, with the split between sneakers and more formal footwear about even, according to Lobban. “For a lot of guys, a clean, well-made sneaker now works in the office,” he adds.

I was looking for a brand that fit between the world of high-end designer trainers and Nike and Adidas athletic footwear.

“The sneaker is no longer perceived as casual fashion. High-tops from Buscemi and Christian Louboutin are their own statement,” says Peter Harris, President of Pedder Group, which operates the men’s and women’s shoes and accessories business for Lane Crawford. “I think the growth in the mid-range luxury sneakers market has been propelled by the democracy of the category at entry price points and a return to youth.” In Asia, youth culture and footwear trends are tightly intertwined, says Harris, pointing to young luxury consumers, who buy everything from Vans to Chanel.

Unlike Greats, Filling Pieces founder Guillaume Philibert relied on a more traditional sales strategy when he launched the Amsterdam-based brand in 2009. “We really needed to be in the best stores, so people could experience the product, feel the quality and feel the adventure that we want to give them when they wear the shoes,” he says. 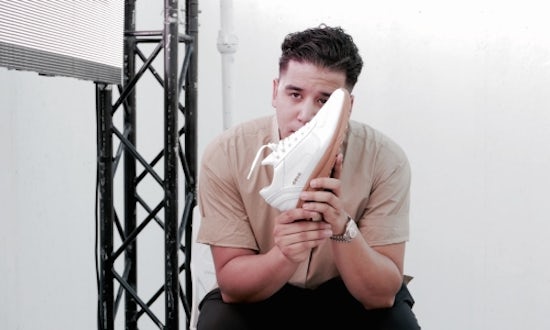 Philibert started his company at age 19, while he was studying architecture. The budding fashion enthusiast developed an appreciation for luxury sneakers from brands like Balenciaga, Lanvin and Common Projects, but they were out of his price range. “I was looking for a brand that fit between the world of high-end designer trainers and Nike and Adidas athletic footwear.” Seeing a gap in the market, he named his brand Filling Pieces after the niche he hoped to occupy.

Philibert manufactures in Portugal — using Italian, Spanish and Portuguese materials — in the same neighborhood where Lanvin manufactures its shoes. Filling Pieces sneakers typically cost between $200 and $300, a perfect price point for boutiques that specialise in limited-edition sneakers and streetwear and an ideal middle ground between a pair of Nike Air Jordans, that cost almost $200, and high-priced luxury sneakers.

“We’re able to provide quality footwear to a 15 or 16-year-old that has a little bit of money to spend on footwear, but also the higher-end clientele that doesn’t really care about brand names and just wants a quality product,” says Philibert. “You have a lot of people buying Buscemis, Zannotti and YSL because they want to have an expensive shoe, but there’s a very big clientele that just wants to have a cool, quality product for a reasonable price.”

By 2013, Filling Pieces was selling to large department stores like Selfridges and is currently in over 450 retailers across more than 42 countries. The company launched e-commerce in late 2013, but 60 percent of its revenue — which has been roughly doubling every year since launch and is expected to hit between €18 million and €19 million (around $19.7 million — $20.7 million) in 2016 — still comes from its wholesale business. “We’re catering to a very wide target group and that’s why, at Barneys, we’re next to the high-end designer shoes. It’s a very accessible and positive price point for them,” says Philibert.

For Tom Kalendarian, who oversees menswear at Barneys New York, Filling Pieces has the potential to be one of the store’s top-performing footwear brands. “They’re very innovative, they’re always coming out with colors and designs that really pop,” he says. The retailer currently carries over 50 different brands of sneakers and, last July, launched BNY Sole Series, a series of eight exclusive-to-Barneys shoes, collaborating with brands including Vans, Common Projects, Converse and Filling Pieces.

“We’re always looking to develop the next big thing,” says Kalendarian. And right now, it’s sneakers. “Leather footwear is still a mainstay of the Barneys business, but it’s not growing at the rate that sneakers is growing.” The best selling sneaker brands at Barneys are mostly luxury labels like Balenciaga, Saint Laurent, Maison Margiela, Lanvin, Giuseppe Zanotti and Lanvin. The outlier is Common Projects, which took 10 seasons to crack the top 10, but Kalendarian thinks Filling Pieces has the same promise. “Barneys customers are looking for something really rare and really well done,” he says. “And those shoes had a really great reaction.”

Editor's Note: This article was revised on 6 January, 2016. A previous version of this article misstated that Greats sneakers are produced in the same factories as Common Projects sneakers. They are not. The two brands produce in similar, but different factories in the same region of Italy.