NEW YORK, United States — “In the 40-some years I’ve been in business, I’ve always been inspired by pop culture from the aspect of fashion, art, entertainment and, today, social media and celebrity,” says the designer Tommy Hilfiger. “Those are the drivers that our company is fuelled by. It’s really about listening to the consumer and being able to mold and shape our business around consumer needs through pop culture.”

On Friday, September 9, beginning at 7pm EDT, Hilfiger will take his brand’s mission to the next level with #TommyNow, a two-day event set to take place on South Street Seaport’s Pier 16, rebranded “Tommy Pier.” The fashion week extravaganza — featuring carnival rides, games, a runway show and plenty more — is the culmination of Hilfiger’s quest to give consumers so-called fashion immediacy. “It’s about delivering on the instant gratification that consumers are really seeking,” explains chief marketing and brand officer Avery Baker. “Closing that gap between the visibility of a fashion show and the moment of purchase.”

That evening, approximately 2,000 guests — half trade, half consumer — will attend a runway show featuring TommyXGigi, the capsule collection designed in collaboration with model and personality Gigi Hadid, as well as select items from Hilfiger’s Autumn/Winter 2016 ready-to-wear lineup. Consumer tickets to the show, made available free of charge through NYCgo.com, were claimed within one hour.

Every single item shown on the runway will be instantly available to shop globally on Tommy.com, and at 300 Tommy Hilfiger stores across the globe. TommyXGigi will also land on the sales floor at 150 wholesale partners within 24 hours, with 40 wholesale partners carrying the main collection. The line will be available in more than 70 countries.

To make this happen, the company has taken several steps to rewire its business since February 2016, when it announced its aim to re-align its runway with the consumer calendar. While the Autumn/Winter 2016 ready-to-wear collection debuted on the traditional schedule, TommyXGigi was kept under wraps, shown only to buyers in private appointments. The capsule collection gave the company an extra season to move its manufacturers to the consumer schedule without skipping a show season. During the February 2017 shows, Tommy Hilfiger will debut its Spring/Summer 2017 collection, fully in sync with what is available in stores.

It’s really about listening to the consumer and being able to mold and shape our business around consumer needs through pop culture.

While many brands have announced plans to do away with the six-month lag time between showing and shopping, few have the muscle to implement the kind of shift seen at Tommy Hilfiger. “We have great relationships with our partners and they went above and beyond to make this happen,” Baker says. “They’re really coming along with us on a journey of trying to be closer to the consumer and work in a different way. It wasn’t easy, it was able to happen with a very, very complex distribution network.”

One of the biggest challenges was the turnaround time on new additions to the main collection that occurred since the February 2016 show. “We ended up injecting some additional pieces and stories, to make sure it felt fresh and new,” Baker explains. This demanded much tighter production schedules and flexibility not only from the company’s own buying team, but also from wholesale partners. “What we found was that even outside of our direct channels, there was really an appetite from some of our key wholesale partners to jump on board,” she says. “They were excited to have that extra layer of special product closer to market.”

Internally, the company tailored its buys to reflect the experimental nature of the initiative. For one, the TommyXGigi collection — set to generate significant buzz no matter when it was presented — dominated the buy. “In the first season, we were fairly conservative in terms of the depth of how much we got behind all of the other products,” Baker says. “We really focused the depth of our buys for the entire show mostly around the US and Europe, but especially the US because of the show. However, we can always re-allocate if we need to between regions and between online and offline,” she adds. “The global scale and breadth we have as a company is really an asset in this situation.”

The company has also invested heavily in marketing this product. That’s where Tommy Pier — and the importance of staging an experience to wrap the goods up in — comes into play. 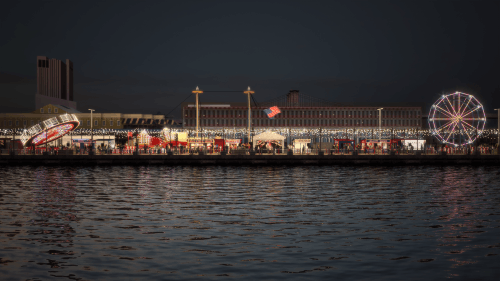 Tommy Hilfiger is known for extravagant runway show sets, which can cost well into the millions of dollars to produce, and Tommy Pier may indeed represent the biggest investment the organisation has made on an event. “It’s hard to say, because it’s not an apples to apples comparison. Because of the shopping elements and all of the interactive aspects that go way beyond just that moment of the show and relate to collections that will be for sale for the next several weeks, it’s not easy to make a direct comparison,” Baker says. “Yes, it’s an increase from where we were, but in terms of exposure and partnerships and platforms, it actually will go significantly farther.”

It all begins on Friday night, when Pier 16 is transformed — with support from the City of New York alongside media relations and production house KCD — into a kind of street fair “curated” by Hilfiger and Hadid, featuring a Jones Music record shop, complimentary nail art from Valley salon and complimentary Americana and nautical-themed tattoos from Brooklyn-based Tattly. The tattoo artist Bert Krak from Smith Street Tattoo in Brooklyn will also be on hand, while Frankie Collective will be operating a booth stocked with authentic Tommy Hilfiger vintage. There will also be complimentary food, beverages, rides and games for guests.

But perhaps the most significant element is the TommyXGigi pop-up shops, featuring digital touch-screen shopping walls — powered by Amsterdam’s Random Studio — that allow guests to purchase every single item from the collection, with free expedited shipping. (The shops themselves will have physical product from the TommyXGigi capsule collection on hand for those who want to shop in-person, although there are no formal changing rooms.) The shopping wall concept is one of the elements that Baker says will travel, utlised at promotional events long after the show is over. “I think that the onsite retail experience is very unusual and definitely part of the future,” Hilfiger adds.

On Saturday, September 10, Tommy Pier will remain open to the public from noon to 8pm EDT, with large-format LED screens broadcasting the show, and Hadid and other key influencers making personal appearances. As on Friday, there will also be complimentary rides and games, a string of DJs and retail-partner installations. (Some services that were complimentary on Friday night — in particular, Valley nail art and Tattly temporary tattoos — will be charging on Saturday. All vendors were invited by Tommy Hilfiger to participate at no cost and all revenue generated goes directly to the vendor.)

Tommy Hilfiger also worked with B Productions & B Live to create a shoppable live video stream, which will be broadcast in Times Square, on Tommy.com, via Facebook Live and on the websites of 175 media partners. (The video will also be available on-demand after the show.) What’s more, product will also be shoppable through behind-the-scenes videos, campaign images and social media, including Instagram — where a link in the brand’s bio will connect to a shoppable grid — Snapchat, where viewers can swipe an advertisement to view a shoppable web page that is instantly loaded — and also Pinterest, where products pinned will be shoppable in the US and the UK.

But while the Tommy Hilfiger team has seemingly pulled each and every lever available in order to make this event a success, the real test may be next season, when spring clothes debut, for the first time, in the spring. Hilfiger, for one, is ready. “We’ve been thinking about this and talking about how to do it, for a very long time…years,” he says. “I’ve always believed in the democracy of fashion and I’ve always been super focused on the consumer. This is a time when the consumer is really demanding what he or she wants, and when they want it. They want instant gratification. They don’t want to wait six months.”