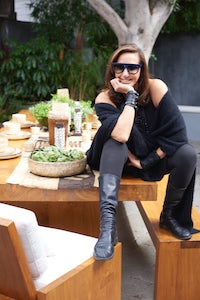 NEW YORK, United States — “Papier-mâché masks were a thing, so I said, ‘Why don’t we make papier-mâché pocketbooks? Then, I went to the horn people — what they were doing was not very good. So I started working with them and trying to create a product that would be, you know, what people would want to wear.”

That’s Donna Karan, ever the creative director, shuffling around her Urban Zen store near the edge of Manhattan's West Village, clad in one of her signature bodysuits and rifling through shelves of accessories she designed in partnership with artisans in Haiti, a country to which she was first introduced by former President Bill Clinton and the Clinton Global Initiative. The collection, which includes roughly woven papier-mâché clutches, stitched-leather armour necklaces and hand-sculpted vases, is an entity in and of itself, with Karan’s aesthetic washing over every single piece. “These are divine,” she says, pointing to one of the leather necklaces. 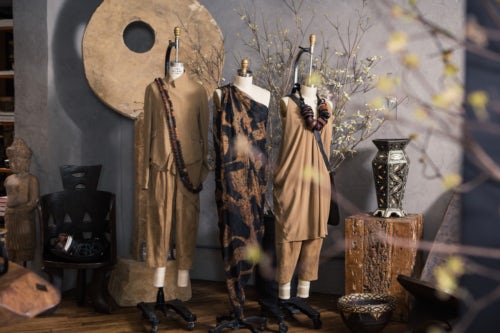 You’d think, at this point, Karan would have slowed down a bit. But since leaving Donna Karan International in the summer of 2015 — and watching its owner LVMH close the Donna Karan house and sell off the company, including the still-in-operation DKNY, to mega-licenser G-III for $650 million — the designer has ramped up on Urban Zen, her multi-pronged, socially conscious brand and foundation launched independently of LVMH in 2006.

Just as she was exiting DKI, Karan launched Urban Zen’s first e-commerce site, as well as an expanded product range. She has grown her physical retail footprint, too, opening a store in West Hollywood in October 2016 alongside the New York flagship, as well as spots in Manhasset and Sag Harbor, and a seasonal store in Aspen.

The in-season apparel collection — an earth-toned, drape-heavy meditation on Karan’s personal wardrobe — was revolutionary at launch, but feels even more prescient a decade later given the industry’s shift toward “buy now, wear now” design. It was also one of the first lines to sincerely drive social good through commerce.

A percentage of sales sold go back to her foundation, which supports charitable initiatives around the world, while 100 percent of the proceeds from the Haiti product — which has generated $1 million in sales thus far — benefit inhabitants of the nation. But this is not only about Haiti. “It’s about the world,” Karan says. “I want to do it in Africa, I want to do it India, and I’ve come up with a plan. I think.”

With a mission to empower children, educate and improve healthcare, the Urban Zen Foundation has developed several charitable initiatives since its founding, including its partnership with artisans in Haiti, which promotes economic development in the country, and Sow a Seed, which aims to support at-risk youth, orphans and children in hospitals by introducing them to yoga through local Haitian instructors.

There is also the Urban Zen Integrative Therapy Program (UZIT). Founded in 2009, the program trains medical and yoga professionals in yoga therapy, reiki, essential oil therapy and nutrition, with an aim to bring a more holistic approach to traditional medicine, partnering with major hospitals from the UCLA health system in Southern California to Ohio State University in Columbus.

Other projects include the Urban Zen Art Center in Haiti, as well as New York’s Urban Zen Center, which is housed in the same building as the retail store and showroom — as well as the former studio of Karan’s late, beloved husband, the sculptor Stephan Weiss. Most recently, Karan partnered with Rihanna and Parsons School of Design to create a collection benefiting Haiti and the performer’s Clara Lionel Foundation.

The fruits of those endeavors will be celebrated on Wednesday at the Stephan Weiss Apple Awards, named after the most famous work of the artist, who passed away from lung cancer in 2001. (His illness, combined with losing several friends to different types of cancer, spurred Karan’s interest in integrated health.) This year’s honorees, Hillary Rodham Clinton and Nadja Swarovski, will be on hand to support the philanthropic work of Karan, as will a host committee that includes Tory Burch, Sean Penn, Ralph Lauren, Calvin Klein, Michael Kors, Diane von Furstenberg, Sting and Trudie Styler. 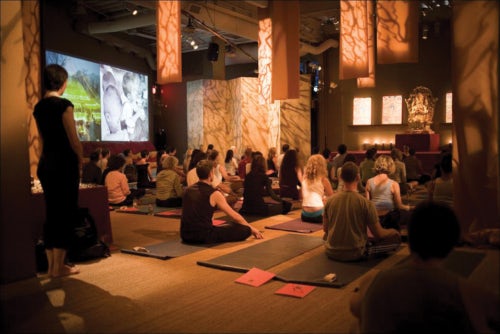 It’s a fashion-star-studded way to recognise Karan’s efforts, but it’s also a nice kick off to Urban Zen’s next phase of growth, which will begin with a revamped website, with the intention to raise capital to expand further. After all, Karan was extolling the benefits of yoga and mindfulness — not to mention holistic medicine and integrative therapy — long before those concepts became bankable. “Everybody used to say to me, ‘There goes Donna on her woo woo trips,’” she says. “I think I was a little ahead of my time. Just a little bit.”

Second to design, Karan’s greatest talent may indeed be foresight. Consider the current conversation around in-season fashion. “Listen, I’ve been talking about this for so long, that I am like… I mean, I will [talk about it] if somebody asks me,” she says, sounding a little more than bored of the topic. In recent months, the industry has become less enthusiastic about “see now, buy now,” with designers — including Tom Ford and Thakoon — abandoning the model.

And yet, it’s working for Karan at Bergdorf Goodman, with another major retail partner set to be announced soon. “I won’t have a wholesale partner unless they do it the way I want to,” she says. As for why other designers have found the approach more challenging? “I can’t answer that. I really can’t,” she continues. “One is the stores have to bring clothes in season. They have to lose that fall delivery that they get in June and July, and bring it into September. But now they have this thing called ‘holiday,’ which is resort dressing, which is pre-spring. Which comes in October, which puts the fall clothes on sale. So everybody’s buying clothes on sale,” she says. “We’ve turned it into a sheet business. You wouldn’t buy a sheet at regular price, you’d be crazy, a white sheet! Why should you buy at regular price when you can get it at… you know. And that’s what’s happening.”

Perhaps Urban Zen is also filling a void left by her namesake collection. Karan’s next act may be well underway, but she seems unafraid to remain closely connected with the past.

I think I was a little ahead of my time. Just a little bit.

Case in point: She keeps friends and colleagues close. On the day BoF visits the Urban Zen compound, Karan introduces her longtime design collaborator, Jane Chung, who most recently served as DKNY’s creative director. “Jane has been with me since beyond the beginning,” she says, giving her a squeeze. Chung, who started with Karan at Ann Klein when she was still a student at Parsons, launched her own label Summa in 2016.  “She’s like my mom,” Chung offers.

Karan is also unafraid to face the future of the company that brought her here in the first place. “I have to tell you, I went to see it,” Karan says. By “it,” she means the new DKNY, which will be sold exclusively at Macy’s. “I was very impressed. I thought the quality was impeccable, at those prices? I expected, you know... But I was very impressed.”

That’s not to say she doesn’t have opinions. “I know what’s missing; I’d like to help. I don’t want to see anything happen to the company, [the sale] took me by surprise, I was shocked,” she continues. “I think [G-III chief executive] Morris [Goldfarb] is a really nice guy, he’s sweet.”