The leading luxury groups are missing out on the kind of value creation happening at companies like Farfetch, which is building the fashion industry of the future.
By
28 September 2018
BoF PROFESSIONAL

This week, aspiring American luxury conglomerate Michael Kors — now called Capri Holdings — announced its acquisition of world-famous Italian fashion label Versace for $2.1 billion, including the debt sitting on the company’s balance sheet. The news came on the heels of another major deal: in late August, Italy’s Ermenegildo Zegna paid a hefty sum to acquire 85 percent of Thom Browne, valuing the American fashion brand at around $500 million.

Both transactions signal that significant value creation opportunities still exist in the luxury sector, which is set to expand by 6 to 8 percent this year, according to Bain. And yet, the scale of the Versace and Thom Browne deals is dwarfed by the blockbuster reception that fashion-tech platform Farfetch received last week on Wall Street where its shares surged way above its listing price of $20 on the first day of trading on the New York Stock Exchange to close at $28.45, valuing the company at over $8 billion. (On Thursday, shares closed at $27.26.)

“Software is eating the world,” Netscape co-founder and venture capitalist Marc Andreessen famously observed back in 2011. “More and more major businesses and industries are being run on software and delivered as online services,” he continued. Fast forward to today and evidence of Andreessen’s point is everywhere. Many of the world’s high-growth, high-margin and highly defensible businesses are driven by technology. This dynamic is apparent in across a wide range of sectors, from music (Spotify) to transport (Uber) to entertainment (Netflix), but lately the attention of the world’s largest luxury groups seems to be elsewhere.

On Monday, LVMH revealed its plans to resurrect the dormant Jean Patou label, which had its heyday in the 1920s, with former Carven and Nina Ricci creative director Guillaume Henry. The week before, Artémis, the Pinault family holding company that controls rival luxury group Kering, announced that it had acquired full ownership of Space Age label Courrèges in another heritage play. Reviving heritage brands like Louis Vuitton and Gucci, huge cash cows, has been one of the most powerful strategies in the luxury playbook for several decades. But are more brand revivals really going to drive the greatest value creation in the years to come?

With online luxury sales up 24 percent to $27 billion last year, luxury firms are certainly more focused on e-commerce than ever before. Earlier this year, Swiss conglomerate Richemont took full control of Yoox Net-a-Porter, the world’s largest luxury e-commerce player. Meanwhile, LVMH is growing its own multi-brand e-tailer, 24 Sèvres; is investing more resources in boosting direct digital sales of its brands; and has deepened a strategic partnership with fashion search platform Lyst, leading a $60 million investment in the start-up. And just last week, parent company Artémis purchased $50 million worth of Farfetch shares.

The “big three” could also snap up digital players like The Real Real or Moda Operandi, in which LVMH already has a stake. But thus far much of fashion’s technology focus has centered on the interface with consumers in marketing and retail. Yet this is only one part of the digital opportunity for an industry still dominated by manual processes and Excel spreadsheets.

It's time for LVMH, Kering and Richemont to look at the way they run their businesses on the inside: the way they make merchandising decisions and manage supply chains — all the boring back-end stuff that, if better managed, could unlock huge value. Failing to seize the opportunity could mean innovation happens elsewhere — and they miss out on the kind of value creation happening at companies like Farfetch, which is building the fashion industry of the future. 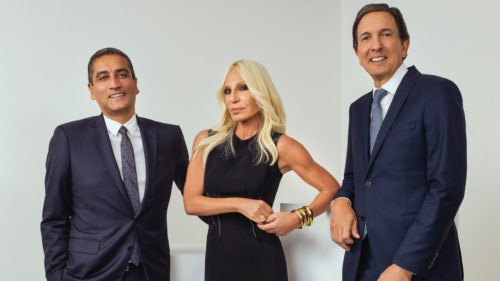 Chanel acquires Orlebar Brown. The company has acquired the digitally native British swim and resort-wear brand from shareholders including private-equity firm Piper and the company's founder Adam Brown. The terms of the transaction were not disclosed. Brown will continue to lead the business as creative director, alongside chief executive Paul Donoghue. It is understood that Orlebar Brown has been seeking to find an acquirer since August 2017, when it was reported to be planning a £50 million ($65 million) sale.

Yoox plans private label. After confirming plans for a private-label business in 2017, the Italian discount fashion e-tailer and e-commerce services company is getting closer to launching its own women's, men's and accessories lines after posting a number of job openings. Parent company Yoox Net-a-Porter wants private label brands to account for 10 percent of off-season net revenues by 2020.

H&M shares rise despite profits falling. H&M's operating profit fell 19 percent to 3.98 billion kronor ($450 million) in the three months through August, marking the 10th decline in 12 quarters. Inventory has been a persistent problem, rising steadily as the Stockholm-based fast-fashion chain failed to keep up with consumers' tastes and as the business was struck by logistics woes. The stock gain was driven in part by a squeeze on short sellers, as pessimistic investors rushed to cover their negative bets.

Hedi Slimane explains his approach to Celine. Ahead of his debut Friday evening in Paris, the designer spoke to French newspaper Le Figaro about his vision for the French brand, his evolving relationship with Los Angeles and his creative process.

Guillaume Henry will lead Jean Patou's return. LVMH has bought a majority stake in Jean Patou and now plans to relaunch the ready-to-wear line in 2019 under the direction of former Nina Ricci and Carven creative director Guillaume Henry. The French heritage brand is also known for its 'Joy' perfume, which was recently brought back by the Dior label.

Instagram's founders announce their departure. Co-founders Kevin Systrom and Mike Krieger are leaving the Facebook-owned photo-sharing app in the coming weeks. Systrom and Krieger — who have been careful to develop new features since founding the app in 2010 — feel that Facebook is moving too fast to evolve and commercialise the product, sacrificing the simplicity that made Instagram so popular. A successor for chief executive Systrom has not yet been named.

Condé Nast International said to be planning Hong Kong magazine launch. Reports are circulating that the publisher is planning to introduce a new edition of Vanity Fair in the region. Condé Nast's arrival in Hong Kong — and perhaps even Singapore, where the company is said to be testing the waters for a possible launch of technology publication Wired — would inject some energy into luxury publishing in Asia.

Amazon opens in New York City for only highly rated products. The e-commerce juggernaut's latest foray into brick-and-mortar will only sell top selling items with a four-star rating or higher, as well as items that are new and trending on Amazon.com.