In late April, Goop, the lifestyle concept launched in 2008 as a weekly email newsletter by actress-turned-lifestyle guru Gwyneth Paltrow, announced its plans to team up with media giant Condé Nast on a printed quarterly magazine. The first issue of ‘goop’ will be published in September. On Thursday, Airbnb and Hearst unveiled the long-rumoured Airbnbmag, set to arrive on shelves in US and Canada on May 23. But in today’s digital world, as print sales continue to fall and advertisers follow consumers online, what do Internet-born brands like Goop and Airbnb want with print magazines?

In essence, both Goop and Airbnb are betting that they will benefit from plugging into the established architecture of legacy publishers, whose vast distribution networks can offer exposure to new audiences. Goop is looking for ways to scale through brand extensions in physical retail, conferences and private-label products. Print is just another channel for this strategy. And while both Goop and Airbnb are creating plenty of their own content, Condé Nast and Hearst can, no doubt, offer deeper editorial expertise — from leading media gurus Anna Wintour and Joanna Coles, no less — and take care of distribution and packaging, where Airbnb, in particular, is less experienced. The short-stay rental marketplace has shaken the traditional hotel industry to its core, but needs to better communicate the experiential and lifestyle elements of its offering. What’s more, with a newsstand price of $3.99, Airbnbmag will provide those who have yet to try the platform with a risk-free way to become more familiar with the service.

But these are clearly symbiotic partnerships and the benefits will flow both ways. Indeed, legacy publishers like Condé Nast and Hearst have lots to learn from digital brands like Goop and Airbnb — especially the way they have grown and nurtured a community around them, something that traditional media brands, rooted in a time when mass communication was a monologue, have struggled to do. Brands like Goop and Airbnb also understand the value of staging experiences — not just telling consumers about a desirable lifestyle, but actually enabling them to live it. Along with its stays, Airbnb offers under-$100 experiential add-ons, from cooking classes to art tours.

But will anyone really profit financially from these new partnerships? It’s doubtful. Details of Goop’s deal with Condé Nast were not disclosed, but as a special-interest publication (or a SIP, as they are known in publishing parlance) it is likely that Goop’s new title will come with a higher price than Airbnbmag as well as a selection of high-end advertisers. Airbnb and Hearst, on the other hand, will split the costs of development, creation and production of Airbnbmag in half, with 45 pages of “broad-based” advertising — from airlines to beauty — set to appear in the first issue. Yet, in both cases, the new magazines are unlikely to really impact the bottom line for either side of the partnerships. For Airbnb and Goop, they are ultimately about brand building, while for Condé Nast and Hearst, they seem more about learning.

Coach eyes further acquisitions for growth. The American luxury accessories company said on Tuesday that it is interested in acquiring handbag, accessories, footwear and outerwear brands, after it reported a profit of $122.2 million in the third quarter. Coach, which is rumoured to be interested in purchasing Kate Spade and now Jimmy Choo, holds more than $1.8 billion in cash, and its CEO Victor Luis has overseen the creation of two new management roles to help develop its portfolio of brands in the long-term.

YNAP revenues rise, boosted by flagship store sales. The online fashion retailer said sales grew by 15.4 percent in the first quarter —at constant currency rates — to €515 million ($566 million), helped by a strong performance from its online flagship stores which includes brands like Armani. Its results add to the mounting evidence that demand for luxury goods is improving, particularly in Asia which was hit hard last year by concerns of a slowdown in China’s growth and a government crackdown on corruption.

Hugo Boss profit rises on Europe and Asia. The German luxury brand saw its adjusted operating profit rise by 4 percent in the three months ended March 31, helped by sales in Europe and Asia. The news comes as a relief for investors as it signals the company’s turnaround efforts, which includes refocusing some of its brands, slowing down store expansion and moving its business online, are beginning to take effect particularly after a number of poor sales figures led to it issuing a profit warning in February last year.

Estée Lauder tops forecasts, helped by new brands. Strong demand for its new and existing make-up brands like Too Faced and Smashbox helped the luxury beauty company report a profit of $298 million in the third quarter, exceeding analyst expectations. Estée Lauder had previously been hurt by US consumers shopping online rather than in department stores, but its recent acquisitions in the past year has helped increased its appeal to younger consumers.

J. Crew buys more time after selling debt to private equity firm GSO. The US fashion retailer has been given more time to carve out its intellectual property and try to fend off bankrupty after GSO Capital Partners — the credit arm of private equity firm Blackstone Group acquired more of its debt, according to a report on Monday. J. Crew Group is currently going through a series of organisational changes, including cutting 150 full-time jobs and 100 open positions.

Burberry moves some divisions out of London. The British luxury goods company announced on Thursday that it planned to open a new office in Leeds, closer to its manufacturing base in Yorkshire. Around 300 roles from departments like finance, HR and procurement will transfer to the new location, which is expected to open in October. The company said in a statement that it would help generate significant savings for the business by reducing office space in London, where it remains headquartered.

Chanel shows cruise collection in Paris. The French luxury fashion house held its latest cruise collection in Paris, which featured airy, artisanal tweeds, draped dresses, set against a Greek-themed backdrop of an archeological dig. Chanel president Bruno Pavlovsky reaffirmed Chanel's decision to tread carefully into e-commerce stating that its customer experience remained at the heart of its business. "We have to protect creativity and not take the easy way of giving everything to everyone."

Bebe avoids bankruptcy with landlord deals. Fashion retailer Bebe Stores has secured deals with its landlords to close around 180 stores, which in turn has enabled it to avoid filing for bankruptcy and continue to sell its clothing online, according to a report on Thursday. Bebe looked to be one of the next in a long line American clothing retailers that have filed for bankruptcy in the last 12 months including brands like BCBG Max Azria, Wet Seal and American Apparel. 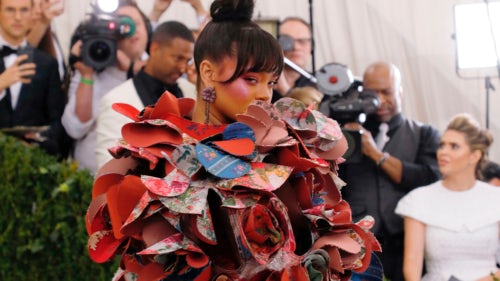 Fashion honours Rei Kawakubo at the Met Gala. The fashion industry paid tribute to Kawakubo on Monday at the Met's annual Costume Institute Benefit, also known as Fashion’s Oscars. Kawakubo, whose wares question accepted ideas around silhouette and the general purpose of clothes, is the first living designer to be honoured with a solo exhibition in 34 years, since Diana Vreeland held an show on Yves Saint Laurent in 1983.

Burberry names new chief merchandising officer. The company has appointed Judy Collinson to the role, replacing Paul Price, who will leave the company to pursue new opportunities. Her appointment comes as part of a raft of new appointments to Burberry's senior management, as the company leads its businesses through a turnaround plan. Collinson joins from Dior, where she was senior vice president of merchandising for the US for five years. She has previously worked at Barneys New York as its general merchandising manager for women’s designers.

Amazon Fashion president Cathy Beaudoin exits. After eight years with Amazon, the company confirmed that its fashion president Cathy Beaudoin exited the role last week. Amazon hired Beaudoin in 2008 from Gap’s Piperlime, an e-commerce brand she co-founded, to lead its push into the fashion market and build relationships with brands. She was named president of the fashion division in 2012. A successor will be named soon. Chief marketing officer Jennie Perry, who worked closely with Beaudoin, remains in her role.