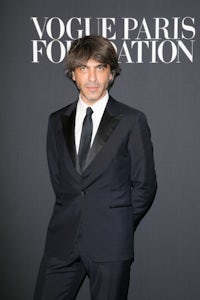 The fashion glossy announced Olivier Lalanne as its new editor in chief, taking over the responsibilities of Béline Dolat who has exited Condé Nast France to pursue a personal project. Lalanne will be stepping down from his role as deputy editor of Vogue Paris (which he has held since 2006), but will continue in his current capacity as editor in chief of Vogue Hommes and assume the responsibilities of managing the men's division, newly created by Condé Nast France to boost its male-identifying audience.

Adrian Ward-Rees, former managing director at Dior Homme, has been named Burberry’s senior vice president, head of ready-to-wear effective July 20. Ward-Rees’ appointment marks his return to the British luxury brand where he was previously the director of menswear. In his new role, he will report to Burberry Chief Executive Marco Gobbetti and join the brand’s executive committee.

Vestiaire Collective has named Dounia Wone its new chief sustainability and inclusion officer. Wone joins the company after previously having worked at Ville de Paris and the French National Assembly. The move came after the luxury resale platform announced its collaboration with the Ellen MacArthur Foundation's Make Fashion Circular initiative.

Veteran fashion journalist Suzy Menkes, renown for her commentary as a fashion critic,  announced she will be stepping down as editor of Vogue International in October after six years at the publication. Menkes said she will continue to write, post and share her thoughts about the state of the industry on her own website and on her Instagram, where she has over 500,000 followers.

The US arm of the luxury conglomerate has appointed Jill Pemberton its chief financial officer, effective August 1. Pemberton, who previously served as senior vice president of corporate financial planning and analysis at Viacom, will assume the responsibilities of Elisabeth Desvignes. (Desvignes will be taking on an undisclosed assignment at LVMH and will be reporting to the group Chief Financial Officer Jean-Jacques Guiony, also effective August 1.)  Pemberton will report to Anish Melwani, the chairman and chief executive of LVMH North America.

Charlotte Tilbury adds to board of directors

After 10 years at the Belgian label, Creative Director Sébastian Meunier announced on his Instagram page that he will be stepping down effective immediately.

The New York-based private equity firm named beauty veteran Pamela Baxter as its new operating partner and executive board member. She will work alongside MidOcean Partner Jonathan Marlow and the company’s investment team to boost its growth strategy within the beauty and wellness segment. Baxter previously served as president and chief executive of beauty brands at LVMH North America and spent 23 at Estée Lauder Companies, where she carried out various marketing and sales, product development and distribution roles for brands like Tommy Hilfiger fragrances and La Mer, before co-founding Bona Fide Beauty Lab where she serves as chief executive.

Chinese tech giant Alibaba has dismissed the head of its livestreming division Zhao Yan on grounds of using his role to help third-party livestreamers attain favourable positioning on Taobao Live, accepting gifts and assisting his girlfriend in securing a well paying job at a livestreaming company, according to an internal document issued by HR on June 29 to employees. The memo did not disclose when Zhao’s contract was terminated, how the findings were uncovered and did not link the gifts received to the favourable positioning.

Matthew Roberts, chief executive of British shopping mall operator Intu, which recently entered administration following coronavirus shutdowns, has stepped down. Administrators at KPMG announced that Roberts, who took the role in April 2019, decided to exit the company after insolvency proceedings were initiated a week earlier.