Luxury Ends 2020 on a Positive Note

The SLI ended both the month and the year in positive territory, virtually against all odds given the impossibly unpredictable trading environment.

Luxury Ends 2020 on a Positive Note

The SLI ended both the month and the year in positive territory, virtually against all odds given the impossibly unpredictable trading environment.

December is usually a quiet month in terms of trading announcements as the focus is on the critical holiday shopping period. Moncler was the only company in our luxury universe to offer insight into trading conditions, announcing that it did not expect sales to substantially recover before the second half of 2021. Chief executive Remo Ruffini expressed concern that further stretches of physical store closures are likely to take place over the first half of 2021, pending widespread vaccination. This sentiment was echoed in a note by UBS, highlighting a slower recovery in tourism that would put brakes on the sector’s growth in the short term.

Luxury’s budding romance with gaming stepped up a notch this month, with Balenciaga presenting its Autumn/Winter 2021 collection in the form of a video game called “Afterworld: The Age of Tomorrow.” The game sees players travel through a futuristic landscape filled with avatars modelling the collection. Before it was widely released, a select few were invited to play the game via virtual reality headsets instead of attending a physical fashion show. There is an increasing number of immersive virtual environments which combine gaming with fashion: Nintendo’s “Animal Crossing” has featured digitised versions of select pieces of MCM’s Autumn/Winter 2020 collection; it was also used by luxury skincare brand Tatcha to replace a trip with influencers to Kyoto (cancelled by the pandemic) by creating a dream destination dubbed Tatchaland in which some 2,000 visitors checked out its virtual skincare lab, hot spring spa and other locales.

The Savigny Luxury Index (SLI) gained nearly 6 percent in December, ending 2020 up over 16 percent, whilst the MSCI gained 2 percent to finish the year up almost 5 percent. 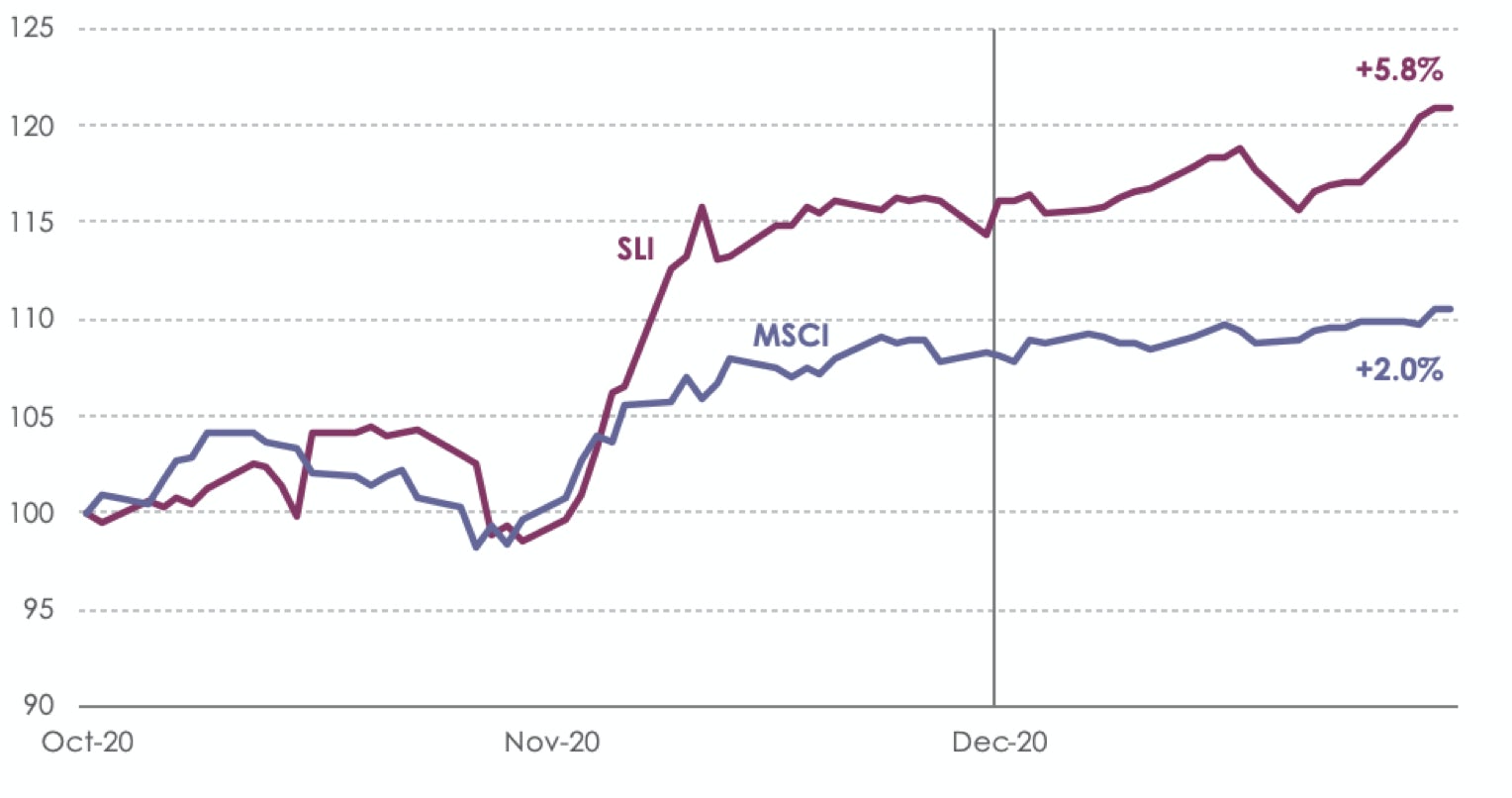 All but one of the SLI constituents posted gains this month, echoing November’s stellar performance. Tiffany’s shares have pretty much locked into the LVMH offer price of $131.5, explaining the stock’s flat performance this month and last.

While the last crisis to hit the luxury goods sector in 2008 gave birth to flash sale and discounting sites such as Vente Privée and Gilt, the current Covid-19 crisis combined with the increased consumer sentiment towards sustainability has lead to a boom in sales of pre-owned luxury items. The sector is dominated by online marketplace platforms such as The RealReal, Vestiaire Collective, ThredUp and Poshmark. Both ThredUp and Poshmark have filed IPO papers this year, while The RealReal is listed on Nasdaq with a market capitalisation of $1.9 billion. Both Gucci and Burberry recently conducted pilot projects in partnership with The RealReal, indicating that second-hand luxury is here to stay. 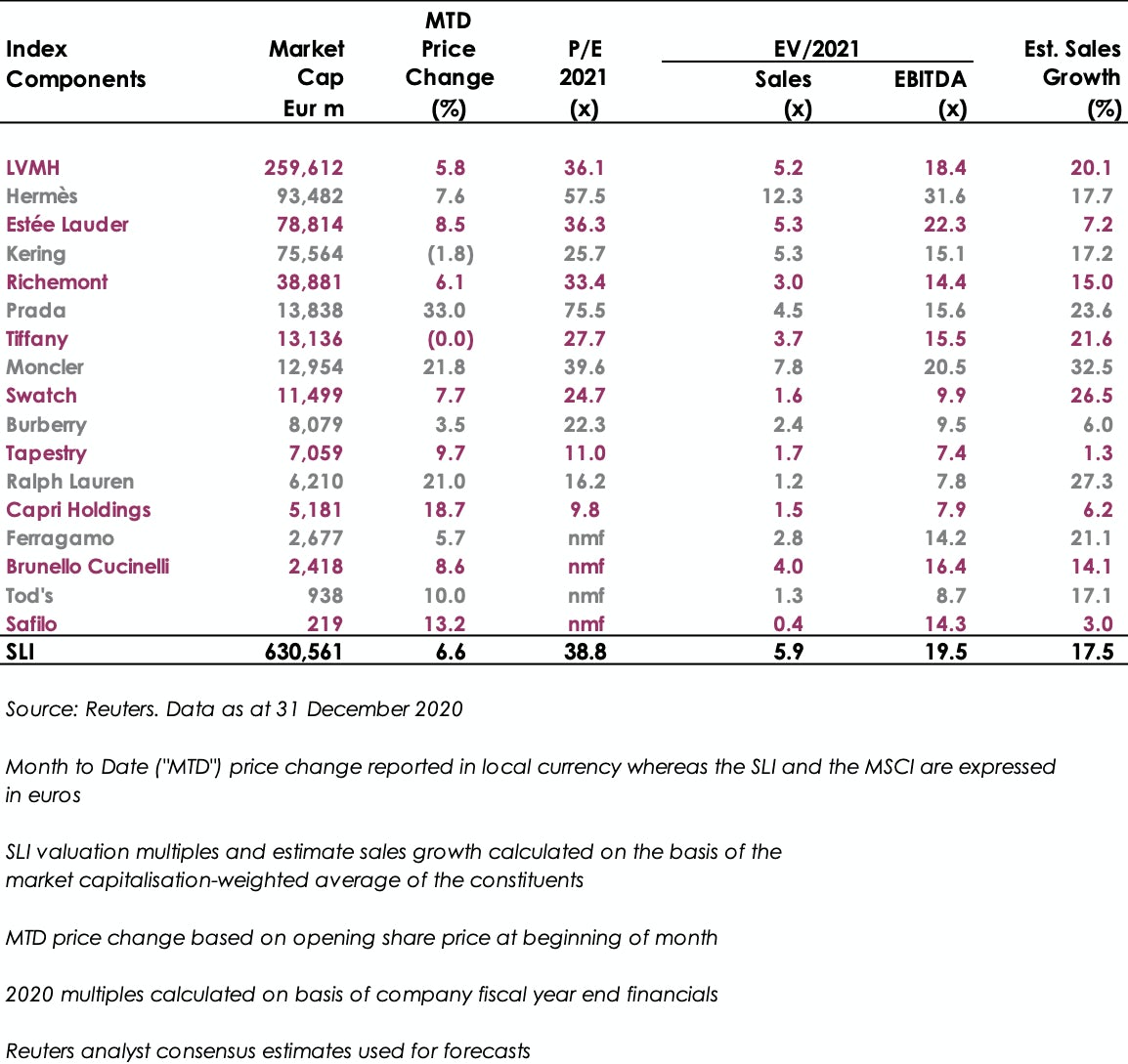