We are approaching the logo with a new attitude. Rather than being slaves to a brand, we take ownership, argues Susanna Lau, aka Susie Bubble, in a piece for the inaugural print issue of Because magazine.
By
17 October 2013

LONDON, United Kingdom — "What are you wearing today?" asked a polite Japanese journalist from one of the many publications that document fashion week street style. They cover it so diligently that she was wielding a notebook with a pre-printed form – Top: Dress: Shoes: etc. Right now, that journalist probably doesn't need to ask the question. The clothing credit is in your face and immediately recognisable. It's the logo, resurgent. Or more broadly, it's typographic fashion, which resonates with a selfie-loving, Instagram-tagging, video-hauling generation.

In charge of numerous Opening Ceremony collaborations that have spearheaded the comeback of a logo (with DKNY and with the skate brand Vision, for instance), Lim and Leon seem to understand the nostalgia of buying into a brand in the most affordable and visible way possible. Don't we all remember a Gap or United Colours of Benetton sweatshirt? Or, if we were into sportswear, a visual declaration of our devotion to Nike, Reebok or Adidas? That's the reason young designers just starting out have turned to this aesthetic, as a way to remember those days. Nasir Mazhar, who has been building up his ghetto-fabulous ready-to-wear over the past few seasons, with Nasir Mazhar-printed ribbon stitched onto sweatshirts and tracksuits, traces his current work back to his upbringing. "It's an aesthetic that's linked to when I was growing up and buying into brands like YSL, Adidas and Nike."

And yet, when "logomania" – a term coined to emphasise its supposed crassness – was at its height, we also associated the logo with excessive consumerism, tackiness and a lack of taste: the opposite of well-crafted discretion. Its resurgence isn't just to do with nostalgia. We're now approaching the logo with a new attitude. Rather than being slaves to a brand, we take ownership. "When all those brands like Calvin Klein and Versace were big, we were really young," says Mazhar. "We didn't have that ability to interact with those brands. Now we've grown up and it's our generation taking back the logo and reclaiming it, wearing it in our own way.In the same spirit of individuality and mischief, a slew of new brands have also popped up to have a laugh at fashion at its expense. Think of the burst of casualwear labels such as Brian Lichtenberg's, with his Homies/Hermès sweatshirts and Feline/Celine T-shirts. Or look at the anonymous collective Conflict of Interest and their punning T-shirts: they read "Ballinciaga," "Giraunchy" and "Brawlmain", proclaiming origins in Brooklyn and the Bronx instead of Paris. They take the piss out of both counterfeit goods and the real thing. You wonder whether the avid consumers of these brand send-ups are happy to wear them because they cost a fraction of their real counterparts, or whether they're eager to pass comment on the stranglehold of the big houses. Kingham believes people do it for sheer lolz. "What these brands are doing is interesting. They are very brave. There's a laugh-out-loud factor with those T-shirts. Sometimes when we're off-duty and relaxing, they're good fun things to wear. Fashion should be fun. It shouldn't be so serious that we can't make fun of things."

The high-end equivalents haven't suffered from all this homage. Their desirability factor is still high: Kingham cites Balenciaga and Givenchy as bestsellers on MatchesFashion.com whenever they produce pieces with logos or distinctive prints. It's obviously a win-win situation for the labels, which can entice customers with lower-priced product categories. In turn, we've witnessed a surge of brands from mid- to high-end queuing up for a slice of the sweatshirt and T-shirt pie: it's easy money. The likes of Chanel and Moschino have also knowingly ridden the waves of a generation who find aesthetic pleasure in their logo-heavy vintage wares, ensuring that the signature gold hardware bearing their names won't be going away anytime soon.

In a world increasingly dictated by insta-moments – a tweet, a Facebook update or indeed an Instagram post – a logo or distinctive typographical design offers a direct hit of gratification. Yet this willingness to brand ourselves seems to come from a different place: it's more than merely showing off a status symbol. It's interesting to see that some logos have more relevance than others and that consumers can gauge which of the labels are doing it right. "There are still a lot of brands around doing the logo in a naff way," says Kingham. "You need to keep it relevant and keep it young. They are being done in a different way and it's about being in a gang." When Phillip Lim sent his street-biker gang out for AW13-14 in sweatshirts bearing the slogan "Sono Mama," Japanese for "as you are," you could see a style tribe emerging. It's not just a question of brandishing another name on your chest; it's about a sense of belonging.

One of the most exciting labels to come out of New York in recent seasons is Hood By Air, designed by Shayne Oliver and approved by A$AP Rocky and Kanye West. Oliver has created his own culture of branding, which has little in common with the profit-hungry approach of the bigger brands. He is communicating his memories of '90s streetwear and by putting his logo out there so overtly, he's forging his own grassroots tribe, one far more connected to the streets than to the rarified air of high fashion. Witness the countless Hood by Air wearers at his recent SS14 show in New York. In London, Mazhar is having a similar effect on an audience who may well feel disillusioned about luxury labels, but find joy in his offbeat casting and Dalston vibes. Both labels, while specific in their aesthetic, manage to feel inclusive and diverse – they speak to an audience beyond fashion's confines.

As the SS14 shows drew to a close, unique ways to brand ourselves textually came into full bloom. Raf Simons unexpectedly incorporated flashy word art with floral prints at Dior. Alexander Wang's logo, subliminally laser-cut into leather dresses in a repeating pattern, allowed him to reassert what he has achieved in such a short period of time. Even Christopher Kane, who has thus far shied away from anything text-based in his collections, emblazoned sweatshirts and lace dresses with the words "Flower" and "Petal," just in case we didn't know we were in a Year 10 biology lesson. Jun Takahashi at Undercover took it to another level by lighting up his ensembles with LEDs that read "Silent" or "Listen," or formed palindromes. It all seems to be coming full circle to the point where certain designers are using typographic logos and collection-defining text as a means of social commentary. 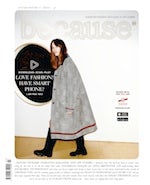 This story appears in the inaugural print issue of Because, a bi-annual "animated fashion magazine and app combo" edited by Caroline Issa.
In This Article
Topics
People
Organisations
Location
Tags