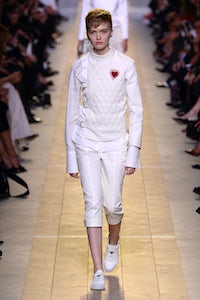 PARIS, France — Christian Dior was famously superstitious, so maybe he’d feel the latest chapter in the history of the house he founded seventy years was written in the stars. Like him, Maria Grazia Chiuri, the creative director newly arrived from Valentino, is an Aquarius.

She also shares a birthday with Victoire de Castellane, the woman responsible for Dior’s successful jewellery collection. At which point it pays to remember that there were astrologers who felt the dawning of the Aquarian Age would bring upheaval, rather than peace and love. There were also others who felt that, as “the house of the woman,” Aquarius would initiate an age of feminism.

On Friday afternoon, a t-shirt on the Dior catwalk announced “We should all be feminists.” Chiuri is the first woman to head up the house, but in a pre-show conversation, she was keen to emphasise continuity, and her respect for all the men who have come before, from Dior himself to Raf Simons. (Intriguingly, she made a special point of mentioning Marc Bohan, whose tenure was the longest and most fruitful but who often gets overlooked in the shuffle.)

In the spirit of Aquarian upheaval,  the trolls are already taking Chiuri to task for her presumption, for what they see as her miserable failure to uphold the Dior legacy, but she made a valid point in that each of her predecessors had their own individual take on that legacy. The problems arise, of course, with hers.

Chiuri had six weeks to create this collection, so she was working under the same kind of time pressure as Simons when he took over in the wake of John Galliano’s departure. But where he drew on the style of Dior the designer (the iconic bar jacket was a fulcrum of his first collection), she opted for something closer to Dior the man in a series of tarot-card-inspired evening dresses, and tulle skirts embroidered with astrological signs or four-leaf clovers.

Problematically, they linked to her work at Valentino, to the gossamer princess gowns that used to steal your breath away. Without more time to osmose the extraordinary archives at Dior, it was inevitable that Chiuri would fall back on what she was familiar with. Even the bare-boards staging in the grounds of the Musee Rodin, where Simons once erected a temple to futurism, echoed Valentino’s presentations at the Espace Ephémère in the Tuileries.

But this woman is fierce. If she insisted on her respect for those designers who’d preceded her at Dior, she also claimed counsel from her children and their friends. She took onboard the way they’d dress up one day, down the next, the way they could mix fantasy and practicality. She wanted the hair, tightly braided in the back, to look like skater kids. Athletic tape, woven with the rubric CHRISTIAN DIOR, trimmed hems to heighten the athleticism. A sheer red tulle skirt over black underpants, under a red leather biker, paired with white sneakers had a careless youthful quality.

And there’s another rub. There was a bare handful of looks that didn’t skew young. The best was a trenchcoat over a crocheted lace… would you call it a cocktail?... dress, which was a fabulous evocation of Dior acolyte Yves Saint Laurent. Otherwise, you were looking at outfits for the Rihanna generation, the woman herself conveniently front row centre as a visual aide-memoire. Maybe that’s what Chiuri meant by the t-shirt which proclaimed DIO(R)EVOLUTION. The message for the Dior faithful around the world was upheaval and growth.

And so we come to the literal sticking point of Chiuri’s debut, the rapier on which snap judgements are impaled. She took fencing as her running theme. Odd. She doesn’t fence herself. And the sport is touched in pop cultural terms by Madonna’s unfortunate flirtation with it in one of the lesser Bond movies. Nevertheless, Chiuri perversely ran with all things fencing throughout her collection, the quilted breastplate both recurring motif and irresistible metaphor. Like I said, she’s fierce. And now she’s padded for the slings and arrows of outrageous fortune, she’ll never take “no,” however resounding, for an answer.