MILAN, Italy — Ruijun “Berry” Huang bought her first Dolce & Gabbana item — a pair of earrings — when she was 18 after seeing Carrie Bradshaw sporting the label in “Sex and the City.” Over the years the Urumqi, China-native has accumulated a collection of Dolce & Gabbana shoes, jewellery, handbags and perfume, sourced from the brand's online shop and on trips to stores in Italy and the US.

“Their design is all flowers and dramatic colours and I [was] all about that,” said Huang, 23, who came to the US from China to attend university and now works in hospitality in Destin, Florida.

But after Dolce & Gabbana’s eventful November, Huang said she won’t ever shop the brand again. That month, an ill-conceived video campaign portraying a Chinese model struggling to eat pizza with chopsticks sparked a backlash, which morphed into a nationwide boycott after Stefano Gabbana messaged poop emojis to a critic of the ad on Instagram and referred to Chinese as “ignorant dirty smelling mafia.” A planned show in Shanghai was cancelled by local authorities hours before it was scheduled to begin.

“After that shitty thing happened, I put all their stuff away and became one of the ‘bullies’ that wrote a bunch of comments under Stefano’s Instagram. I was angry as hell,” Huang said. “But actually it was easy for me to get over… If you’re a racist piece of shit, okay, I just won’t spend my money [on you] anymore.” 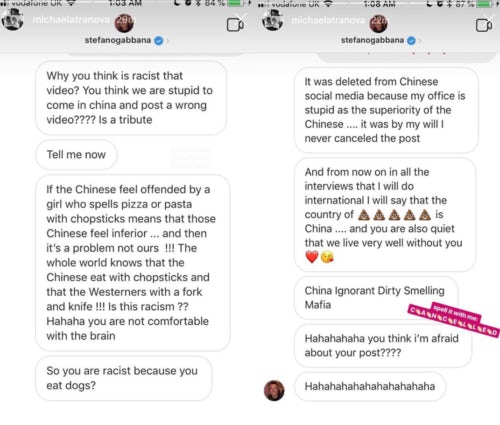 Huang isn’t alone. In what some China watchers are calling an unprecedented backlash to a Western apparel brand, two months after the controversy erupted, Dolce & Gabbana remains effectively blacklisted in the country. As of late January, the brand’s products are not for sale on leading Chinese e-commerce platforms, including TMall, JD.com and local sites for Net-a-Porter and Farfetch. In December, discussion of the brand on the social media platform Weibo was down 97 percent compared to the prior four-month average, according to Gartner L2.

The surprisingly durable boycott is raising questions about the future of the brand, which reported revenues of about $1.5 billion in 2017. Dolce & Gabbana is less reliant on China than some of its competitors, but it clearly saw enormous potential in the country, which is likely to surpass the US as the world’s biggest luxury market sometime this year. The company has experienced little backlash in the West — a menswear show in Milan went ahead as scheduled and products are available for purchase online in the US and Europe. But Chinese consumers are using social media to take their anger global, still peppering Dolce & Gabbana’s official Instagram account with poop emojis and extracting apologies from celebrities who publicly support the brand.

“We’re in uncharted territory in this case. We’ve never seen a luxury brand in modern times make a mistake of this magnitude in the China market,” said Liz Flora, editor of Asia Pacific research at Gartner L2.

A Dolce & Gabbana representative did not respond to a request for comment.

Dolce & Gabbana’s situation is so unusual because it and other brands that ran afoul of the Chinese public managed to quickly bounce back from past gaffes. In April, Balenciaga apologised hours after video surfaced of Chinese shoppers apparently being wrestled to the ground while waiting in line for sneakers at a Parisian department store, defusing calls for a boycott.

Dolce & Gabbana overcame blowback from a 2017 marketing campaign featuring images of blue-collar Beijing residents, which some angry consumers considered an unflattering depiction of a cosmopolitan city, after pulling the ads and hiring Chinese celebrities to represent the brand. The incident did little to dent the brand's popularity; over the last two years, Dolce & Gabbana was by far the most popular luxury fashion label on Weibo, generating 41 percent of engagement in the category, according to Gartner L2.

The brand's founders issued a video apology days after the November incidents, but it fell flat in the wake of Gabbana's disparaging comments, as well as his initial claims that his account had been hacked. Dolce & Gabbana also lacks celebrity cover this time, as its ambassadors, Wang Junkai of popular boy band TFBoys and actress Dilraba Dilmurat, terminated their contracts in November.

Timing may have also been a factor in the most recent incident. Chinese consumers are increasingly assertive, as the country’s booming economy has led to a heightened sense of cultural pride. Where in the past many would have overlooked a respected Western brand’s transgressions, consumers now are hopping on social media to discuss any perceived transgressions by a company. For instance, Burberry's latest Chinese New Year campaign sparked some criticism from people who said the photos resembled posters for Asian horror films.

“Chinese people are very proud of the progress that the country has made in the last 30 years,” said Sam Natapoff, president of Empire Global Ventures, a consultancy that helps businesses establish a presence in China. “There has always been a sense in China of its international cultural importance, but China is also recognising its increasing commercial importance.”

Natapoff said Dolce & Gabbana can redeem itself — but that it'll take more than a hasty apology this time. The brand will need to express its penitence publicly and repeatedly. The company should also make overtures to Chinese leaders in fashion, culture and politics, even if it means risking embarrassment when rebuffed.

“They have to apologise in a way that consumers and establishments in China will recognise and accept," Natapoff said. "I think the Chinese understand that people make mistakes. It won’t be cheap but if they make an honest and sincere effort, I think the Chinese consumer will appreciate that.”

Since its apology, the brand has laid low in China and has not posted on its Weibo since November 23.

While it may seem business per usual for Dolce & Gabbana everywhere else in the world, with tourists snapping selfies outside boutiques in Rome and London, the public relations nightmare hasn't been contained to China. Earlier this month, Kim Kardashian deleted an Instagram story promoting Dolce & Gabbana after facing online backlash. Vogue editor Suzy Menkes was also chastised after publishing a positive review of the brand’s December show in Milan.

“As a journalist, my job is to follow as many fashion designers as possible and report what I see,” Menkes wrote in an Instagram post. “And I am deeply sorry if words I have written have been interpreted in any way as a support for racism, which I deplore.”

And as the freeze-out drags on in China, the brand risks a fate worse than notoriety — irrelevance.

“A friend of mine in China told me she sent one of her Dolce & Gabbana handbags to her grandma to use for grocery shopping,” Huang said, laughing. “We have so many fabulous choices in the world. In my fashion group, nothing is changed without Dolce & Gabbana.”