At the Met Ball, Holier Than Thou

For followers of fashion, the Met Ball is akin to a religious experience, so this year's Catholic theme was gloriously apropos. Marshall Heyman goes inside the Party of the Year. 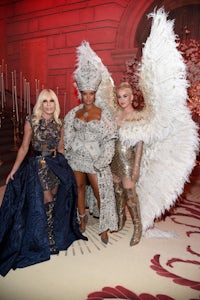 At the Met Ball, Holier Than Thou

For followers of fashion, the Met Ball is akin to a religious experience, so this year's Catholic theme was gloriously apropos. Marshall Heyman goes inside the Party of the Year.

NEW YORK, United States — For a lot of people who are in fashion, who are admirers of fashion or simply just fashion adjacent, the annual Met Ball is akin to a religious experience.

As it is written, on the First Monday in May, the most beautiful creatures in all the world (and a few high rollers and their friends) ascend the steep staircase of the Metropolitan Museum of Art to attend the so-called Party of the Year. Thusly, they shall indulge in many a bathroom selfie and create perfectly glamorous tableaux that will lead to standalone issues of Vogue, humorous memes meant to incite chuckles around the globe, and a major uptick on time spent on gym treadmills and Peloton bikes the following morning.

This year, the proceedings took on an even holier-than-thou aura. That’s because the evening’s theme was “Heavenly Bodies: Fashion and the Catholic Imagination.” The accompanying Costume Institute exhibition features 150 pieces, including ones by Balenciaga, Versace, Coco Chanel and papal garb on loan from the Sistine Chapel. In turn, Monday’s décor included a 30-foot high replica of a papal tiara made from gold and off-white roses with Plexiglas meant to look like rubies, emeralds and diamonds.

There were other narratives surrounding the event this year as well, including rumors swirling that Anna Wintour may be leaving Condé Nast, denied by the company, and the suggestion that this was her last hurrah. There is also the upcoming June release of Ocean’s 8, in which characters played by Sandra Bullock, Helena Bonham Carter and Rihanna rob the Met Ball. (Sadly, Warner Bros. would not screen the film in advance of the big affair.)

“I play a cater waiter with Cate Blanchett and we spend a lot of time in the kitchen, so it’s actually nice to be here in a fancy dress,” said the writer and actress Mindy Kaling, a few moments after someone helped her with the train of her silver Vassilis Zoulias dress.

But really, it’s an evening for guests to one-up each other with attire that is becoming more and more over the top.

“Are you going to take a photo of me?” Wendi Murdoch, who was dressed in a Giambattista Valli dress, accessorised with a diamond cross from the former collection of Elizabeth Taylor, asked the photographer Theo Wenner. “You look amazing.”

You hear a lot of that kind of back and forth at the Met Ball.

“Every time I see you, it’s in a dress I want to wear,” Kerry Washington told Sarah Paulson.

“My goal is to look like Bea Arthur all the time,” explained Ms. Paulson, who turned around to find Katy Perry, dressed quite literally as an angel.

“What was the theme tonight?” Ms. Paulson asked Ms. Perry.

Someone asked director Greta Gerwig, who was standing with Laura Dern and Bradley Cooper, if her dress was designed by the Row.

“It is the Row,” responded Ms. Gerwig.

Though social media is technically not permitted inside and during the event — an irony, perhaps, considering that Instagram hosted a table and its founder, Kevin Systrom, is a regular guest — attendees snap, snap away.

Bob Kraft, owner of the American football team the New England Patriots, asked his girlfriend Ricki Noel Lander to take a photo of him with hip hop trio Migos. Actor Jonah Hill stepped in for the shot, too. “This is the illest photo of the night,” said Mr. Hill, who was wearing diamond studs in both ears and has become an unlikely fashion icon for his taste in street menswear.

Everyone wanted a picture under Ms. Perry’s angel wings (which she removed before dinner), and with Frances McDormand’s Valentino haute couture cape and headgear (which someone whisked away during an unnecessarily long pre-dinner performance by a papal choir, only to return it afterwards).

Designers seem to use the evening to create lots of original social media material for their own purposes. Diane von Furstenberg did an impromptu photo shoot with Anne Hathaway in a well-lit exhibit hall where the actress dropped to the floor and looked up to the sky.

“Careful, my hair is dangerous,” said Ms. Hathaway of the knitting needles that made up her hairpiece. “These are so sharp. I saw Donald Glover and he said ‘Oh, you took my eye out.’ And I said, ‘Did you lose your contact lens?’ I take everything so literally.”

Valentino brand ambassador Carlos Souza had Ms. McDormand literally act out a video post. “Was that good? Good,” she asked him when it was done. Stella McCartney did the same with Miley Cyrus, who later complained she tried to get out of the evening because she’d had too much to drink the night before.

“Hi ladies!” Ms. McCartney said to a crew that included Ms. Cyrus, Naomi Watts and Paris Jackson as they walked into cocktails in the Temple of Dendur. “Are you all feeling natural and effortless?”

“Let’s fucking do it,” responded Ms. Jackson, who had on a backpack.

Of course, none of it is natural and effortless. There are complaints of pained feet — Michelle Williams left early, barefoot, thanks to a (previously) broken toe — and of Ariana Grande getting in the way of your big photo moment.

But at least SZA, one of the many hip-hop stars present, was impressed. She wore Versace and gold tears on her right cheek.

“This is the craziest. It’s an apparition. A dream," she said. "Every second of this is a new moment."

How Anna Wintour Won Over the Vatican