If it plays its cards right, Boohoo could accelerate its American ambitions and learn from Nasty Gal’s success in brand and online community building.

If it plays its cards right, Boohoo could accelerate its American ambitions and learn from Nasty Gal’s success in brand and online community building.

This week, Nasty Gal, the Los Angeles-based, venture-backed fashion retailer that filed for Chapter 11 bankruptcy protection in November, announced it has been acquired by Manchester-based fast fashion e-tailer Boohoo, confirming a previous report by BoF. Boohoo is said to be buying Nasty Gal, once valued at more than $200 million, for a mere $20 million and will gain the ultra-trendy label’s intellectual property and customer data, among other assets. But will Boohoo be able to effectively exploit its new purchase and overcome the legacy of Nasty Gal’s past mistakes?

Nasty Gal, which began as an Ebay store, quickly grew into a business generating more than $100 million a year in sales, largely on the back of a close, social media-driven relationship with its community of “badass” girls who identified with the company’s sexpot-hipster attitude. But the label lost some of this core base when it raised prices too high in a failed repositioning. Meanwhile, the product offering itself was easy to copy and competitors ranging from upstarts like Boohoo to established players like Forever 21 and Urban Outfitters began eating into Nasty Gal’s market share.

At the same time, Nasty Gal founder Sophia Amoruso emerged as a brand of her own. Her cheeky, self-help business memoir — #GirlBoss — grew into a movement, but its relationship to the Nasty Gal label became hard to decipher, diluting the power of the brand and creating confusion amongst consumers. What’s more, as #GirlBoss continued to grow, Amoruso’s attention drifted away from the core business and Nasty Gal found itself without a focused leader.

Nonetheless, for Boohoo — which has been trying to crack the US market for years but remains relatively under-penetrated — Nasty Gal’s name recognition in the country could prove a boon and the company could certainly use the brand to accelerate its American ambitions. Boohoo also has much to learn from Nasty Gal’s undisputed success in building a powerful brand and online community. For its part, Boohoo is well positioned to grow Nasty Gal’s global footprint, expanding the label into Europe where it already resonates with consumers.

Kering reports fastest growth since 2012 and Hermès signals China recovery. Fourth-quarter sales at the French luxury goods conglomerate rose more than 10 percent, the fastest growth since 2012. Kering’s strong performance was driven by continued impressive growth at Gucci, and improvements in Asia and Europe. Meanwhile, Hermès reported revenue growth of 7.6 percent, bolstered by strong performance of its main business lines, adding to evidence that the luxury goods market is rebounding, especially in China, where demand has ebbed in recent years.

L’Oreal considers selling The Body Shop for $1 billion. The French cosmetics giant is exploring a $1 billion sale of natural skincare chain The Body Shop. The brand, which has more than 3,000 stores across 66 countries, has become a dark spot in L’Oreal’s portfolio, suffering from declining sales and operating profit.

Michael Kors shares slump after cutting its forecast. Shares of the accessible luxury brand tumbled 13 percent after it cut its annual forecast following a disappointing holiday season that saw comparable sales drop more than expected. Michael Kors is currently working to reduce its dependence on department stores, which have been hurt by declining retail traffic, and margin-diminishing discounts.

LVMH-Supreme rumours unfounded. Reports that LVMH had acquired Supreme for $500 million have been shot down by sources close to both companies, despite a collaboration between the cult streetwear brand and Louis Vuitton unveiled during Paris Menswear Week. This is not the first acquisition rumour to circulate around Supreme, adding to speculation that interest in the brand is heating up. 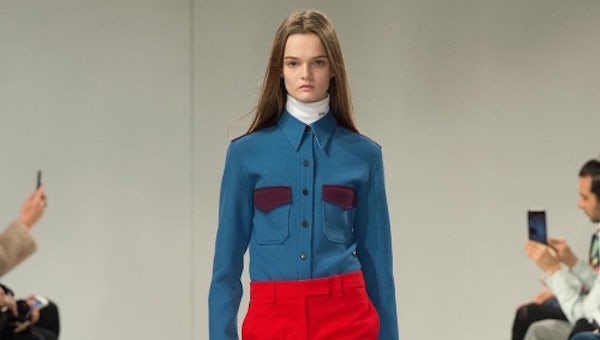 Raf Simons stages his first Calvin Klein show. Raf Simons has made his debut as chief creative officer of Calvin Klein, following his appointment in August last year. Simons, who was given control of the creative direction of the company’s entire stable of brands, also unveiled a new logo last week.

Ivanka Trump brand plans to expand. The company announced plans to expand its business after growing sales by 21 percent in 2016. The move followed news that American department store chain Nordstrom had decided to drop the line, citing poor sales. Nordstrom was one of several retailers to come under fire from the Grab Your Wallet campaign to boycott stores carrying products linked to Ivanka’s father, US president Donald Trump.

Tiffany & Co. CEO Frederic Cumenal departs. The former LVMH executive tasked with turning around the troubled American jeweller has left his role of CEO after almost two years in the position. He will be replaced by chairman Michael Kowalski while a successor is recruited. Tiffany & Co. has struggled in recent years to maintain its standing as an industry leader, faced with challenges in both mature markets like the US and emerging markets including China.

Simone Rocha opens New York store. The Irish designer has opened a boutique in New York’s Soho, following on from her first store, which opened on London’s Mount Street in 2015. The shop will help Rocha drive further growth into North America, which is now her second-largest market after Europe. The label has been profitable every year since Rocha graduated from Central Saint Martins in 2010.

Google and H&M create a dress based on data. Google has partnered with H&M-supported Ivyrevel to build a “coded couture” app that will use tracked smartphone data such as users’ location, activity and environment, such as local weather, to create customised dress designs. The announcement is the latest in a number of partnerships between fashion companies and technology businesses, as both industries look for a way to make data wearable.