Nomad, Rocha's Miami-based agency, is set to open a Los Angeles office in 2018. 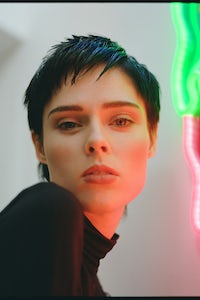 Nomad, Rocha's Miami-based agency, is set to open a Los Angeles office in 2018.

LOS ANGELES, United States — In the wake of Terry Richardson’s fall from grace — and the onslaught of stories of sexual harassment being shared anonymously on Cameron Russell’s Instagram feed — the industry is paying more attention to models’ wellbeing. But for Coco Rocha, the Canadian supermodel that last year took a majority stake in Miami-based modelling agency Nomad, the topic has always been one of utmost importance.

“It’s amazing that a light is finally shining down on subjects like sexual harassment and body shaming, but what’s frustrating is that when we tried to talk about it years ago, the industry wasn’t ready for it,” said the 15 year model veteran, who has frequently appeared on the covers of Vogue, Harper’s Bazaar and i-D, and been the face of brands such as Chanel, Dior and Versace.

Last year in June 2016, she and her husband James Conran, took a majority stake in the Miami-based modelling agency, along with the agency’s two founders, Damon Rutland and Roman Young.

“[Joining Nomad] is my way of responding to [these issues] without pushing it down everyone’s throat,” explained Rocha, who has previously spoken out about a number of topics, ranging from the unhealthy pressure underaged models often endure, to questionable agency accounting practises and the overuse of Photoshop.

Rocha also took on the role of brand director in which she personally mentors Nomad’s models. “When I started modelling I didn’t feel like I had a big sister to tell me how this industry works… It’s a way of saying that there’s a way to do this professionally by taking care of our girls and letting them know they’ll be okay.”

The hands-on approach has quickly made a mark on the industry.

Since this time last year, the agency has increased the number of models it represents by 185 percent and currently counts industry heavyweights like Korean model Soo Joo Park, Victoria Secret ambassador Jourdana Phillips and, of course, Rocha herself, on its roster. It recently launched its first office outside of the US, in Vietnam, and is now expanding its American operations to Los Angeles with a new booking agency set to open in January 2018.

“I think where there’s work there should be agents, and California has plenty of work,” said Rocha, of the decision to open an office out West. “There’s talent that live there so why not come to them and make one more successful agency.”

“When I started I tried to be outspoken and I was told that I should keep silent on this subject because it wouldn’t benefit me,” recalled Rocha. “[But] I want business women that are outspoken.”

A New Charter Aims to End Model Abuse: Will It Work?