NEW YORK, United States — When married designers Lisa Mayock and Jeff Halmos began planning the June 2016 launch of their graphics t-shirt range Monogram, there was no question that they would adopt a direct-to-consumer business model made possible by e-commerce, which is relatively cheaper than opening a physical store and allows a brand to market directly to customers across the globe. “Jeff and I both have a wholesale background, and what we liked about direct-to-consumer was that it’s about getting feedback in real time,” says the New York-based Mayock, who co-designed the line Vena Cava, while Halmos did Shipley & Halmos. “In wholesale, you would ship to the store and it would be a game of telephone to find out what the customer liked or didn’t like.”

For career designers who have been burned by the traditional retail system — where discounts, buybacks and upfront expenses can put a line out of business in one season — the direct-to-consumer model offers plenty of upside: increased margins, the opportunity to develop personal relationships with shoppers who are decreasingly brand loyal and the ability to charge a lower price for a higher-quality product. It’s no wonder that everyone from Mayock and Halmos to Thakoon, whose collection is set to relaunch this fall, are optimistic about the possibilities afforded by going direct.

And yet, as more and more brands choose to launch in this way, success has become more challenging. For one, customer acquisition is more expensive than it was when direct-to-consumer brands like Warby Parker began emerging in 2010; promoting your product on Facebook, and increasingly, Instagram, now costs money. When the first round of direct-to-consumer companies launched in the late aughts and early 2010s, the strategy was formulaic: Find a product category where the shopping experience is “broken” — due to lack of choice or too-high prices — and offer a product that is similar in design aesthetic and quality for much cheaper. Cutting out the middleman — or a wholesale partner like a department store, which marks up product 2.2 to 2.5 times in order to make money off of it — allows a brand to maintain a reasonable margin.

As the marketplace becomes increasingly crowded and competitive, the brand must also develop its own identity.

Today, however, it’s not just about financials. There has been yet another transformation in the consumer mindset. Offering a cheaper, generic version of a luxury product — as many direct-to-consumer brands still do — is not enough to guarantee conversion. Now, as the marketplace becomes increasingly crowded and competitive, the brand must also develop its own visual identity in order to earn the consumer’s admiration, trust and, hopefully, dollars.

The shift can be detected in recent moves made by category leaders. For instance, when basics brand Everlane launched in 2011, it wasn’t necessarily knocking off a more expensive version of a straightforward t-shirt. Instead, the premise was to offer closet staples for a fraction of the typical price. But there were several other startups doing a similar thing to what Everlane was doing, including American Giant and the Paris-based Maison Standards. Everlane, however, was able to distinguish itself not only through its business practices — which emphasise production and pricing transparency — but also by creating a brand identity through consistent art direction. The company further underscored its commitment to maintaining a point of view when it hired industry favourite Rebekka Bay in 2015 to lead product and design. While Everlane’s well-honed aesthetic has remained in tact, Bay has elevated the brand by introducing items in her signature modernist shapes. Reports suggest that the company’s valuation is now “north of $250 million.”

There is also noticeable difference in the way recently launched direct-to-consumer brands are marketing themselves. Gone is the “taking out the middle man” jargon. Instead, it has been replaced by editorial content that aims to connect with the consumer on an emotional level, distinguishing the brand not just by its value proposition, but also by its physical attributes. 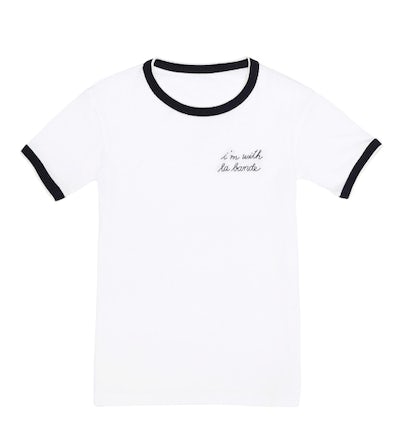 Consider La Ligne, the stripes-heavy collection launched by three fashion industry insiders — two ex-American Vogue editors and a former Rag & bone executive — in April 2016. While the opportunity to offer made-in-NYC clothes at a lower price point was part of the reason the company chose to focus on direct retail (only partnering with one wholesale partner, Net-a-Porter), founders Meredith Melling, Valerie Boster and Molly Howard created messaging that centred entirely on the product and the women who would wear it. An ongoing portrait series, for example, features friends of the brand — including filmmaker Rainer Judd and actress Olivia Wilde — self-styled in their favourite pieces. In turn, many of the sell-out items in the first collection have been the most distinguishable, including a $335 off-the-shoulder top and a $115 ringer tee embroidered with the phrase, “I’m with la bande.”

The top, called the “Coquette,” sold out almost immediately. “We had to [order more] within a week of launching,” Howard says. “The crew tee has also been a huge hit because it’s a super, super identifiable. A cult piece.”

It’s also notable that while La Ligne’s founders do not have a design background, they do hail from the fashion industry, which indicates another change in the direct-to-consumer landscape. While the first crop of direct-to-consumer brand founders were proudly fashion outsiders, with zero-to-little design experience, traditional fashion designers and industry insiders have come to recognise the potential of the model.

Indeed, the two worlds are merging, and perhaps for the better. When the New Delhi-based married entrepreneurs Simran Lal and Raul Rai laid out plans to launch the lifestyle brand Nicobar, they enlisted an old friend, the well-known Indian designer Aparna Chandra, to lead the design vision for apparel. The resulting aesthetic is minimalist in silhouette and concept, with a distinctly Indian colour palette and sensibility. “We love Aparna’s relaxed, easy, cool style,” explains Lal, who is also behind the well-known housewares brand Good Earth. “And India is rich in fabrics, so we use our textiles in the best possible way.”

The resulting mix has conjured more interest from outside of the country than the couple expected this early on in the development of the business. The direct-to-consumer model has allowed for interested parties abroad to immediately access the brand. “Even if we wanted to go to third parties [abroad], there is not enough demand [yet],” he says. “We were just in New York, and every block you’ve got 10 different choices. India is not at that stage.”

Launching international shipping from the get go, however, has allowed consumers to find Chandra’s wares organically. “We’ve received orders from about 15 countries and 10-15 percent of our online revenue comes from abroad,” Rai says, comparing Nicobar’s mission to that of lifestyle company Muji, which has created a distinctly Japanese brand with global appeal.

Nicobar, however, is also unique in that it is owned by a family that has interests in several companies. Unlike many direct-to-consumer brands looking to scale, it won’t necessarily require outside capital to do so. But for those seeking funds, venture capitalists are interested in companies that are not only distinct visually, but also in concept. “It’s also important for fashion entrepreneurs to look for opportunities that exist beyond delivering great product and think about solving problems with how fashion is discovered and delivered,” fashion-tech executive Ari Bloom wrote recently in a BoF op-ed. Today, customers are spoilt for choice. While distinctive product and correct pricing may help a brand reach a certain level of success, crafting a unique experience could catapult it.

“We’re looking for something specific: customer experiences that are really broken,” says Taylor Greene, a partner at New York-based Lerer Hippeau Ventures, which has invested in brands including Glossier, the Black Tux, Everlane and footwear line Allbirds. “In apparel, the customer experience is fine. I don’t have a hard time finding a shirt. There are so many $100 options.”

To be sure, the next step for designers and entrepreneurs who want to launch new brand is to think about what distinguishes them beyond design. As Greene says, “The brands that we’re looking for are really creating movements.”