How I Became... A Footwear Designer

Having collaborated with the likes of Rihanna and Alexandre Vauthier after training in the famed Riviera del Brenta district, Amina Muaddi offers her advice on starting out as a shoe designer.

How I Became... A Footwear Designer

Having collaborated with the likes of Rihanna and Alexandre Vauthier after training in the famed Riviera del Brenta district, Amina Muaddi offers her advice on starting out as a shoe designer.

PARIS, France — Growing up between Jordan and Romania — “a bit out of the fashion world from a geographic perspective” — Amina Muaddi followed her desire to work in fashion by moving to Italy and studying Fashion Communication at the Istituto Europeo di Design’s Milanese campus. After graduating, she landed her first job as a fashion assistant at L’Uomo Vogue before moving to New York to work at American GQ.

Unfulfilled by working in editorial and styling, Muaddi returned to Italy at the age of 24 to realise her career aspirations in shoe design. Concerned she lacked the technical training of a design graduate, Muaddi moved to Riviera del Brenta, the famed Italian district for luxury footwear production, to learn from the local artisans every component of the shoemaking process, before she co-founded her first brand Oscar Tiye in 2013.

Describing the field as “a jungle,” requiring a “thick skin in order to navigate it, especially as a young woman,” Muaddi’s first brand did not succeed. However, the designer persevered, launching her second eponymous label in August 2018 — designed in Paris and produced in Italy. BoF previously reported the brand achieved over €20 million ($22.2 million) in sales over the past 12 months. Global stockists include Bergdorf Goodman, Lane Crawford, Harvey Nichols, Ssense, Browns and MyTheresa, and she has launched exclusive capsule collections with the latter two retailers. Muaddi will soon launch a line of mini-bags and statement earrings. 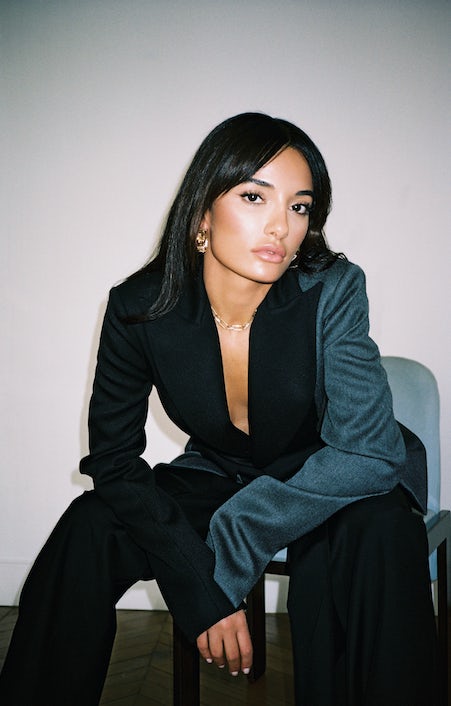 Muaddi has also collaborated with French designer Alexandre Vauthier on his footwear lines, which she continues to design today, and most recently worked with Rihanna on the footwear for her LVMH-owned Fenty label, which dropped in July 2020. Here, she shares her career advice.

Growing up first in Jordan and then in Romania, I was not in an epicentre of fashion, so I was a bit out of the fashion world from a geographic perspective. But I was passionate about the industry and it felt like a natural instinct for me.

I decided I wanted to work in fashion when I was 9 years old and I asked my mum how I could work for a fashion magazine. At the time, I had just moved to Romania and it’s not like there were fashion schools there. My mum said I would probably have to study journalism and my journey towards a fashion career started when I moved to Italy for school at 16.

I went to IED in Milan and I studied Fashion Communication. I did an internship at Bridal Vogue before getting my first job as a fashion assistant at L’Uomo Vogue and then at GQ US in New York. That’s how I started working in fashion, not through a fashion company but editorial and magazines.

How did you land your first job at Vogue?

I actually wanted to work at women’s fashion magazines but there weren’t a lot of opportunities. Everyone would offer you an internship, but no one would offer you an actual job. So, for me, working with a stylist was a way to do what I love and get paid through the photoshoots we were doing, but it was still very difficult.

I was worried about how I would be able to grow in the industry. I think the fact that I had a lot of passion and determination helped me, but my studies and most importantly my thesis also helped. I made the first ever issue of Vogue Romania as my graduation thesis, with photoshoots, editorials, art direction. I put all my heart into that project and that was what got me my first job.

How did you transition to design from styling?

When I was working with magazines, I didn’t feel fulfilled and the boss I had at GQ – he was an editor and celebrity stylist – told me, “If you feel like you want to have a brand, you don’t have to wait.” He helped me realise that I didn’t have to wait to reach a certain age or position in my styling career and that I should just focus on what I actually wanted.

You are going to be put last as a young designer that doesn’t have a lot of pieces and financial power, so you have to be persistent.

To begin with, a part of me felt like I should have maybe studied design instead of fashion communication, although we had a lot of courses that were mixed with the design classes like the history of design and textiles. But I was worried I couldn’t design without being a good technical sketcher. I think I just needed to get out of that traditional mentality and realise that I was more of a designer than I thought I was because I had a strong vision and a sense of what I wanted.

So, I decided to move back to Italy and I spent one year in the Riviera del Brenta area, where basically everyone lives off shoemaking. I started working with an artisan who would take me to all the suppliers to learn how each component is made. I went to see the artisans who made soles, stitching, the under heel, the boxes, the dust bags — every single component in the chain, I learnt how it was done before I launched my first shoe brand Oscar Tiye in 2013.

Why is it important to learn from the artisans and factories?

I taught a class with students on an MA in shoe design and some of them were so talented and had beautiful designs, but they had no clue how you’re supposed to make the shoe functional. How are you closing the shoe? How do you put your foot in it? How do you get out of it? How do you make sure it’s comfortable and it does not touch a part of your foot that hurts? There are a lot of technicalities in shoes — unlike clothing, they can hurt easily. 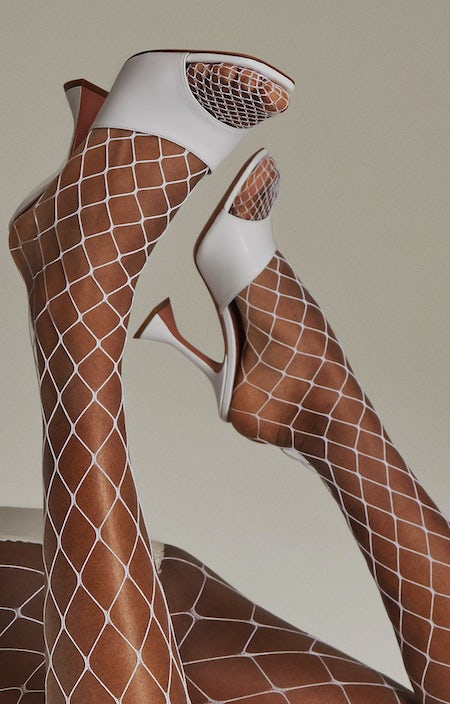 I noticed that some of the students weren’t technically trained and the only way to do that is the spend time in a factory — and you should go to small factories and suppliers because when I started, there was no factory that wanted to work with me.

When I had my first set of samples, there were a lot of obstacles, but I ended up showing them to a sales agent — who remains my sales agent to this day. He decided to take on my collection but being a very small production, it was hard to find a factory that agreed to work with me in the beginning.

What was the biggest lesson you learnt starting out?

First of all, I missed my first production. The timing was off, we were late with the samples and the factory set to produce my first collection kicked me out before we even started production. But do not allow mistakes to stop you. I learned that this is a jungle and you have to have thick skin in order to navigate it, especially as a young woman.

I also didn’t accept being disrespected. That’s why I lost my first production. It can be hard to find someone that believes in your project and wants to invest in you timewise and with their machines.

You can’t be too sensitive and take things personally but I also think it’s important to know where to draw the line with people and demand what you deserve or what you are owed. You are going to be put last as a new brand or a young designer that doesn’t have a lot of pieces and financial power to leverage, so you have to be persistent.

How do you approach collaborative projects with other creatives?

I have been offered many projects to collaborate on, some of which felt close to my heart and some of which didn’t. I never involved myself in a project that I didn’t believe in 100 percent. So, I never looked at the financial aspect but the creativity and the growth and the potential and the love I had for it, and that’s why I think my projects were successful because I did them with my heart.

I have a strong vision of my own so for the collaborations I do, I know I have to implement my vision and basically mould two worlds together. I must put my aesthetic through the brand’s DNA to create an aesthetic that I feel matches it. Then again, if someone were to collaborate with me, they would bring their elements but translate that through my aesthetic and my brand’s DNA.

What advice would you give those looking to survive and thrive in this time?

We work in a field where you need to be passionate, so I want to see someone who is passionate and creative and has this feeling of, “I want to make change, I want to disrupt, I want to bring something new.” The excitement of creativity is what I love the most. That is what we work for. Vision, talent and originality is also what I like as there’s not a lot of it.

The way people carry themselves, the way they speak or write a letter, is important. It’s about how you communicate yourself besides your set of skills.

Language and the way people carry themselves, the way they speak or write a letter, is also important. I receive a lot of messages from people wanting to work with me and it can be disappointing if they lack a more professional approach. Social media makes people too informal. The way you speak is important. I am open to reading the messages — I hired my PR through a message on Instagram — but it’s about how you carry and communicate yourself besides your set of skills.

What do you believe is essential to being successful in fashion?

It’s not only about talent and the desire to set yourself apart from what others are doing but also about your persistence. It takes a long time to establish yourself — it took me 8 years to get to where I am today. And I failed before with my first brand, so I’m not scared of that.

When I began Amina Muaddi, I went to a PR company and told them I wanted to launch a see now, buy now product through wholesale. I also didn’t care about editorial press. I didn’t want to do fashion week presentations. And I was advised not to do that. But I didn’t let anyone’s advice influence me.

When you get advice from an institution, whether it’s in sales or PR, you tend to think they know what they’re doing because they are supposed to be the authorities, but they are not necessarily modern authorities. You have to stay true to yourself. If you allow everybody to influence you, you will never be successful because it will never be authentically you. You need a lot of ambition and hard work, but also to think in a diverse way. Be a leader, not a follower.