The polarising, era-defining line, designed in 1992 for Perry Ellis, has been reproduced 26 years later.

NEW YORK, United States — Marc Jacobs has never been afraid of mining his own archives to spur new ideas, but his Resort 2019 collection takes the approach to another level.

In lieu of something new, the designer has reproduced his famous Spring/Summer 1993 “grunge” collection for Perry Ellis, which debuted in the fall of 1992 at New York Fashion Week. Twenty-six looks from the line have been replicated exactly — in the in original prints, fabrics and embroideries, down to the shoes, jewellery and accessories — for a capsule that Jacobs is calling 'Redux.'

The major press push begins with the release of a Juergen Teller-shot look book on November 7, combined with cross-promotion on the social channels of both Marc Jacobs and Perry Ellis. The collection will be sold online starting November 15, dropping in physical stores — including a pop-up on Madison Ave in New York City — on November 19. (Customers can pre-order items on Marcjacobs.com starting today.)

"The ‘grunge’ collection epitomised the first time in my professional career I was unwavering in my determination to see my vision come to life on the runway, without creative compromise," Jacobs said in a statement. The first time around, the line was reviled by critics including Suzy Menkes and Cathy Horyn, some of whom have walked back on their harsh remarks in the decades since. (“A typical outfit looks as if it were put together with the eyes closed in a very dark room,” wrote Bernadine Morris in the New York Times.) Going into the show, Jacobs’ position at the American fashion house — whose founder was best known for “classics with a twist” — was shaky at best. Shortly after, he was fired. 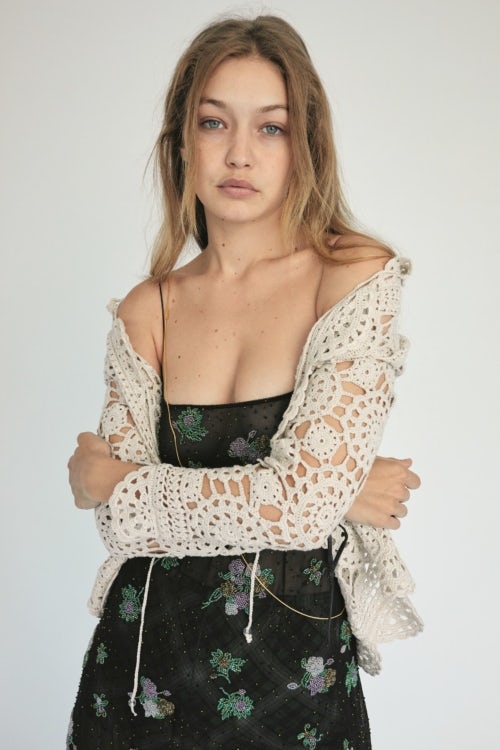 But in the end the collection was seminal, helping to define 1990s aesthetics with its loosey-goosey beanies, slack plaid flannels rendered in elegant silk, expertly beaded — yet still flimsy! — floral slip dresses and striped tees inspired by the street style of alternative, Singles-era Seattle. It also made Jacobs an international star, capped off with an enduring Steven Meisel shoot in American Vogue. In 1997, he was hired by LVMH to transform leather-goods house Louis Vuitton into a major fashion player. Today, Louis Vuitton generates an estimated $10 billion a year in sales.

Jacobs’ own brand has gone through a series of ups and downs since he and business partner Robert Duffy signed a deal with LVMH 20-plus years ago. After exiting his role at Louis Vuitton in 2013 to focus on his namesake collection, the brand has struggled to maintain its marketshare, folding its contemporary Marc x Marc Jacobs line into the main collection in a move that caused confusion among both retailers and consumers. In the past three-to-four years, sales have more than halved to an estimated $300 million in 2017.

In February 2018, the company hired former Baja East designer John Targon to revamp the lower-priced offering, only to dismiss him less than three months later. (In September, it was announced that well-known fashion designer Olympia Le-Tan had joined the team.)

The “grunge” collection could very well offer Marc Jacobs a much-needed boost. Donatella Versace’s Spring/Summer 2018 collection, a tribute to her late brother Gianni that was inspired by his most iconic creations, generated plenty of brand heat that has had lasting effects. Versace’s current momentum made it a plum acquisition for Capri Holdings, which struck a deal in September to purchase the Italian fashion house from its private equity owner for $2.2 billion.

As for Perry Ellis, its current offering couldn’t be further away from Jacobs’ vision. Sold at stores like Macy’s, the brand primarily deals in standard men’s clothing and is currently owned by George Feldenkreis, who acquired the rights to the name in 1999.

It's true that as long as Marc Jacobs doesn’t use the Perry Ellis name in any of the marketing or promotion of the collection, he likely didn’t have to gain permission from the company to reproduce it. But Marc Jacobs' chief marketing officer Debbie Woloshin was proactive about including Perry Ellis in the process, according to Vincent Panzanella, the brand's vice president of marketing and communications. The brand just so happened to recently launch a unisex capsule featuring sporty items from its 1990s archives, making the timing "serendipitous," he said.

While the "redux" is wholly a Marc Jacobs production, Perry Ellis shared historical assets and will promote the line through its own channels. "It's exciting for us to see these pieces that were such a big part of fashion history reproduced," Panzanella said. "Having them bring us into the fold was a nice change from what you typically expect from fashion."

Will Marc Jacobs Step Back from His Namesake Brand?