The brand that helped define the athleisure aesthetic faces stiff competition from new labels and activewear giants. Founder Tyler Haney says she has a plan to stand apart, including the launch of its first swimwear line.

The brand that helped define the athleisure aesthetic faces stiff competition from new labels and activewear giants. Founder Tyler Haney says she has a plan to stand apart, including the launch of its first swimwear line.

NEW YORK, United States — When Tyler Haney founded Outdoor Voices in 2014, her concept — recreational apparel for active people who don’t necessarily see themselves as athletes — looked like nothing else on the market. Now, facing online imitators and a host of retailers pitching sports-inspired fashion to the masses, the charismatic founder is doubling down on her approach, which means a lot more stores and a steady stream of new product launches.

Outdoor Voices secured $34 million in a March funding round, with one goal: keep expanding its reach beyond a core audience of in-the-know city men and women who are being bombarded with images of similar-looking apparel on social media. The company, known for its colourblock leggings and other modern, minimalist gear, is launching a series of activity-specific collections. The latest is a swimwear collection, called H2OV, launching this week. Outdoor Voices also plans to open 22 stores in the next 18 months, on top of 6 locations today.

Standing out as a small brand in the activewear market is more difficult than it was four years ago. Leggings are easy to manufacture and popular products are quickly imitated. Apparel companies, including Old Navy and Forever21, have wide-ranging, accessibly priced athletic lines. Activewear giants like Nike, Adidas and Lululemon spend hundreds of millions of dollars developing new fabrics and other technological innovations that are beyond the scope of smaller brands.

These companies are all vying for a share of one of the fastest-growing segments of the apparel market. While activewear as a category isn’t expanding as quickly as it had in recent years, US sales did rise 2 percent in 2017, to $48 billion, outpacing the market as a whole, according to the NPD Group. NPD predicts athleisure — defined as activewear not intended for performance sports — will grow faster than any other apparel sub-category and surpass $31 billion in sales by 2022. 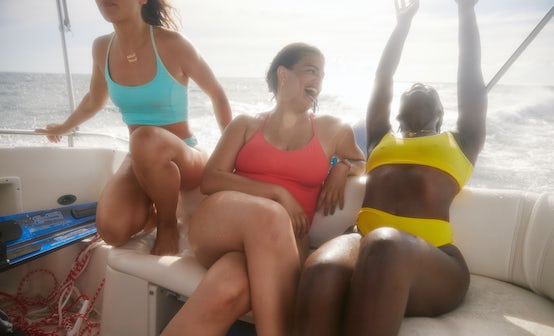 “[Outdoor Voices] is in a very challenging space because what they are doing is a major trend,” said Ari Bloom, an investor in early-stage fashion start-ups and chief executive at San Francisco-based fashion software company Avametric. “If they aren’t doing product that can’t be ripped off very easily, then it’s very hard to stay in front of everybody.”

Haney has enlisted some high-profile help: the most recent funding round was led by GV, the investment arm of Google’s parent company. Existing investors include General Catalyst, Forerunner Ventures, A.P.C.’s Jean Touitou and others, bringing the total raised to $57 million. Last August, former J.Crew chief executive Mickey Drexler was named chairman of the board.

In an interview with BoF, Haney said the Outdoor Voices brand can be broken down into four traits — materials, comfort, functionality and design — that have guided her from the beginning. The business runs in her family, as her father, Bob Haney, owns an apparel supplier in her hometown of Boulder, Colorado. She started working on the brand fresh out of Parsons School of Design in 2012 and got her first wave of press when Outdoor Voices became the first activewear line to be sold at J.Crew.

The first store in Austin opened in 2014. Today all sales are conducted through its own channels, and more than 70 percent comes through the Outdoor Voices website. While the company did not comment on revenue, Haney said the company is not yet profitable.

Haney sees a lot of untapped potential for growth by releasing activity-specific collections.

By comparison, Reformation, a direct-to-consumer brand founded in 2009, has raised $37 million and has 11 stores, as well as a new agreement to sell at some Nordstrom locations. Everlane, founded in 2011, has raised about $20 million and crossed $100 million in revenue in 2016, according to media reports. Both brands are larger in revenue than Outdoor Voices, according to market estimates.

All of these companies face the same core challenge: their backers expect rapid growth, and social media — once a promising way to find customers through word of mouth — now requires increasingly expensive marketing to achieve the same results.

Haney sees a lot of untapped potential for growth by releasing activity-specific collections. The brand launched a new sweat-wicking fabric in 2017, followed by running and tennis capsules this spring — and now swimwear — all aimed at customers who like Outdoor Voices’ aesthetic but want more functionality and technical innovation.

More “activity packs are coming” over the next two years, but it’s a slow process, Haney said.

“Technical product takes a really long time to develop, so it’s not by choice that I didn’t have an assortment for five different activities at the beginning,” Haney said, adding that the design approach is about balance, so the same garments can be worn while walking the dog but also for running a marathon.

Outdoor Voices is taking a risk by attempting to out-innovate behemoths like Nike and Lululemon.

“I don’t know that their customer cares that it’s the best performing. I think they care that its the best looking and the best fitting,” Bloom said. 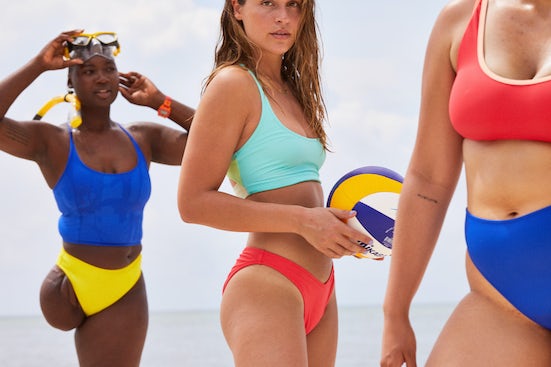 Swimwear is potentially an easier market to crack, as it has fewer dominant brands. Almost 10,000 consumers have already signed up to an H2OV waitlist before launch. Over the last several years, an influx of online or direct-to-consumer swimwear brands has emerged, from Solid & Striped to Summersalt. H2OV is made to stay in place during activities like beach volleyball and kayaking, and is also “a little bit like your old nostalgic Speedo, but modernised and feminised,” Haney said.

At the same time, thanks to the new injection of capital, Haney is opening more stores, including seven planned for the second half of 2018 and 15 in 2019. The locations are meant to steer customers to the website and serve as community centres for Outdoor Voices’ free #DoingThings programming, which includes running clubs and surfing lessons.

“We opened the [first] store nearly day one, at the same time as the online business, and a lot of the companies that are at the same age and stage [as Outdoor Voices] are just now starting to open stores,” said Haney. “There is real value created in having both compound on each other.”

With more stores comes more inventory, which is expensive to stock. It also increases the risk that large amounts of clothes will go unsold, forcing markdowns. The brand has largely avoided formal markdowns because the product isn't seasonal, but many of its ambassadors offer discount codes.

It helps that Haney finished moving the Outdoor Voices headquarters from New York to Austin in September 2017. “It’s a distraction at a young stage," she said about the transition. "I underestimated probably what that would require just in terms of HR and logistics." But it was important to her to get out of New York where “a lot of companies start looking the same” and she said the company is in Austin for the “long run.”

About 60 employees made the move to Texas, she said, where they total about 130, and a handful decided to opt out of the company during the move. About eight people, focused on content and creative development, remain in the New York office.

“It’s all the punks that wouldn’t freaking move,” she said.

In addition to Drexler, Outdoor Voices has enlisted more experienced operators over the last year, including Terri Rockovich from Casper as chief digital officer, and Colleen Campbell from Under Armour as merchandising director. Drexler has been an active part of advising on hires.

Even so, Haney is still looking for a chief operating officer. Three months after Drexler joined, Haney’s early partner and presdient, Andrew Parietti, left the company.

“Ultimately we weren’t really able to find the right position for him,” she said, adding that they had overlapping strengths in areas like branding and creative development. “Since I founded it, it didn’t necessarily make sense [for him to stay].”

As for Haney herself — Outdoor Voices’ best ambassador, a frequently sought-after event speaker — she wants to focus more on introducing bigger audiences to the brand and “building the strongest creative team any company has ever had,” she said.

“When people know about us, they love us,” she said. “Make money, have fun is my philosophy. We are very focused on becoming profitable.”

How Fashion’s Most Talked-About Start-Ups Are Actually Performing