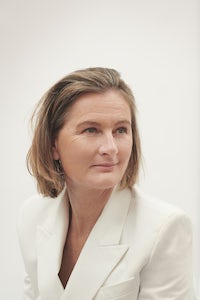 Véronique Gébel has been appointed to lead Fenty, LVMH and Rihanna’s fashion venture, BoF has learned. She joined LVMH in 1997 and worked for several brands including Givenchy, Fendi and most recently Louis Vuitton. Since 2007, she was director of women's and men's ready-to-wear at the group's flagship brand. The executive will run the new label spanning ready-to-wear and accessories, including shoes, sunglasses and jewellery, reporting to LVMH executive committee member Jean-Baptiste Voisin.

Men’s wellness direct-to-consumer start-up Hims has appointed its first chief marketing officer. Melissa Waters joined the company as of April 2019 from Lyft, where she was vice president of marketing. She reports to Andrew Dudum, founder and chief executive of Hims.

Michael Clinton is stepping away from his 41-year career in media, 21 years of which were spent at Hearst where he was most recently president, marketing and publishing director as well as a member of the company board. He is retiring on July 1, 2019.

In the wake of David Beckham’s split with business partner XIX Entertainment, the former footballer has announced a new, independent brand and commercial management team. Appointments include: Chief Marketing Officer Isabel May, formerly Burberry’s EMEIA communications director; James Pabla, who will join in late June as head of digital; and Creative Director Sara Hemming, who worked as visual director at Stella McCartney. They will all work alongside Beckham’s long-time manager David Gardner, who will head up operations as managing director.

Marie-Sabine Leclercq, chief executive of EPI-owned luxury children’s' wear brand Bonpoint, has left the company. She initially joined Bonpoint as communications and marketing executive in October 2016 before being appointed chief executive in May 2017. Christian Piat, head of EPI in Asia is acting as interim CEO with immediate effect.

Puig adds SMCP CEO to board of directors

Daniel Lalonde, chief executive of Sandro and Maje owner SMCP, has been added to Puig’s board as an independent director.

Meredith Corp. has appointed Agnes B Chapski vice president and publisher of InStyle with immediate effect. Chapski was formerly president of media company Sando’s Beauty Engine, as well as its NewBeauty publication. She reports to Doug Olson, president of Meredith Magazines.

British luxury brand Temperley London has appointed Luca Donnini its CEO, replacing Sally Hughes with immediate effect. Donnini joins the company from Guess Europe, where he held the role of president, and previously spent 20 years at Max Mara. As CEO he reports to Temperley London’s board of directors.