NEW YORK, United States — Since Shawn Stüssy started selling graphic tees from the back of his car, the streetwear industry has always had a masculine edge. And yet women have long bought smaller sizes of streetwear brands, integrating them into their wardrobes. “Putting on a new Supreme hoodie feels as good as wearing a new designer bag,” says creative director Jen Brill, a fixture on New York’s downtown scene.

Supreme doesn’t produce a women’s range. But Stüssy, a first mover in the space, began selling a women’s line back in 1995. At first, it was largely composed of scaled-down reiterations of its menswear. But, as the market for streetwear expanded and evolved, the company grew its women's offering, developing a range that now includes everything from graphic crop tops, denim skirts and logo-heavy maxi dresses to camouflage swimwear, fleece hoodies and bandana-patterned mesh activewear. Others have followed suit: companies like A Bathing Ape, Carhartt and Crooks and Castles now offer women’s ranges, while newer streetwear labels like Married to the Mob and Hlzblz, launched in 2004 and 2005 respectively, were conceived for female consumers from the ground up.

Putting on a new Supreme hoodie feels as good as wearing a new designer bag.

In December 2015, Ronnie Fieg, founder of cult New York streetwear store Kith responded to the high volume of women purchasing smaller sizes of the company’s menswear items with the launch of a 400-square-foot dedicated women’s space on Bleecker Street, dubbed Kith Women. Fieg says customers range from teenage girls to women in their 30s and 40s.

"I feel like today, more than ever before, the female is very much in tune with what's happening with menswear with social media having made it easy for people to observe other people's fashion and style," he explains. "In the last few years, men have been offered a wider selection of streetwear style pieces, and today women are wanting the same opportunities to buy into that," he adds. According to Fieg, foot traffic to Kith Women has doubled every month since launch, though the company declined to reveal sales figures. 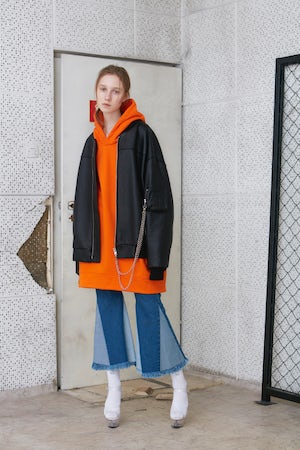 Certainly, women’s tastes have evolved. So has streetwear. "Streetwear is a broader trend today and it's less focused on the harder elements that started it, which makes the female consumer more willing to buy into the clothing," says Matt Powell, an analyst at NPD Group.

"We're taking more of an athleisure approach to women's, but looking at it with a a very different lens," explains Fieg. Kith Women sells traditional athletic brands like Nike, Adidas and Asics, alongside its own-label women’s line, which drives about 80 percent of women's apparel sales. “I think we have had really good success through that and therefore will continue to grow.”

Some brands — like Off-White, Kanye West's Yeezy and Fenty, a Puma collaboration with Rihanna — have attracted women by taking cues from high fashion labels. “Female streetwear as we knew it five years ago, doesn't exist anymore," says Natalia Maczek, founder of Polish contemporary label Misbhv, whose menswear, now in its fourth season, is stocked at Selfridges, I.T Hong Kong and VFiles. In September, Maczek will show her first women's presentation at New York Fashion Week, marking the second season of her women's line. "Having your own strong vision is essential, when you just take what you do for your men's line and put it in a brutal way on something feminine it just doesn't always work," she says. Propelled by rising women’s sales, Maczek expects Misbhv to grow overall revenue by 30 percent, season-on-season.

Yet some of today's most powerful streetwear brands, like Supreme, don’t produce women’s products. "I think men will look at a brand and think that it's a brand for their girlfriends and not for them, thus maybe shy away from it," says Powell.

The Hustle Behind Kith: Ronnie Fieg's Self Made Empire