As both a source of production and a consumer market, Africa is poorly integrated into the global fashion system, leading to lost business opportunity.

As both a source of production and a consumer market, Africa is poorly integrated into the global fashion system, leading to lost business opportunity.

CAPE TOWN, South Africa — Vast tracts of the globe have been ushered into the fashion system over the past decade. The arrival of the Far East, the Middle East, Latin America and the former Soviet bloc have helped to redraw the fashion map and turn what was once a parochial, insular and Euro-centric industry on its head.

As a result, fashion today is a far more cosmopolitan and geographically diverse enterprise than it was a generation ago. Yet there is one region that still remains on the fringes of this otherwise global business: Africa.

Brimming with culture, creativity, talent, ambition and natural resources, but plagued by poor infrastructure, poverty, corruption, protectionism, bureaucracy and political instability, Africa is anything but straightforward or monolithic. And herein lies the most fundamental issue of all. 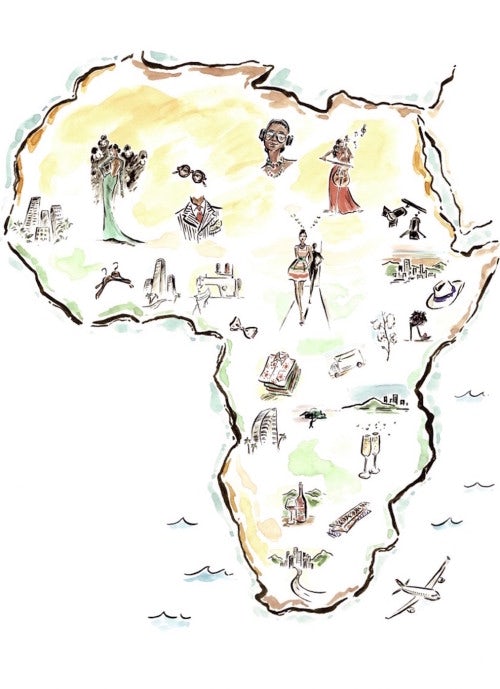 The very notion of an ‘African market’ can be misleading. Unlike the European Union, the 55 distinctive countries that make up the African Union are not economically integrated as a single common market. With over 50 different trading and legal conventions, ten overlapping regional blocs, a dozen climate zones and 2,000 spoken languages, this is a highly fragmented and precarious region, whether you’re sourcing, producing, selling or doing anything else along the fashion value chain. But it is one with scale and potential like no other.

Africa is home to one in seven people on the planet and occupies more real estate than China, America, India and Europe combined. In one sense, the ‘Africa Rising’ narrative that has been playing at conferences and boardroom meetings couldn’t be more accurate. According to the 2014 Ventures Africa Rich List, there are 55 billionaires in the 55 countries that criss-cross the continent. Meanwhile, New World Wealth counts 165,000 African millionaires, who together hold an incredible 28 percent of the continent’s total personally-held wealth.

At the other end of the spectrum, scores of Africans are still fighting their way out of poverty, while many more remain under its oppressive yoke. In conditions unimaginable to most of us, a third of Africa’s 1 billion people live on less than $2 per day. But according to the African Development Bank, there is a new upwardly mobile mass of around 350 million people earning between $2 and $20 per day, who are driving growth in burgeoning consumer markets like fashion.

Though the business challenges in Africa can be as epic as the opportunities, things are noticeably improving. It is true that logistics and transportation networks are so poor that it costs two to three times more to deliver merchandise to an African customer than to their counterparts in most developed countries. However, The Economist calculates that over the past decade, 75,000 kilometres of new road have been built on the continent, thanks in large part to investment by the Chinese. And, although Africa’s retail sector is still overwhelmingly informal, there are dozens of new shopping malls being built all over the continent.

With competitive labour costs, Africa has the potential to claim a much greater share of the world’s apparel and textile manufacturing output, but to achieve this, significant international investment is needed to build the industrial infrastructure required to compete with the likes of Asia. Nevertheless, a few bright spots are now emerging where clothing and footwear factories are creating both competitive products and sustainable jobs, such as in Mauritius, Ethiopia and Madagascar.

You don't need to be a maverick or a first- mover to succeed in Africa anymore. According to the World Bank, the average annual growth rate across the continent is around five percent and the risk-to-reward ratio is much lower than it once was. Many African fashion businesses, large and small, are both innovative and profitable — but most will continue to underperform if they remain unplugged from the global fashion grid. Fortunately, at this juncture, support from the right international partners has the potential to pay dividends for investors and local businesses alike.

A version of this article first appeared in a special print edition of The Business of Fashion, which highlights ‘7 Issues Facing Fashion Now,’ from sustainability and the human cost of manufacturing clothing to untapped business opportunities in technology, Africa and the plus-size market.

Join the discussion on BoF Voices, a new platform where the global fashion community can come together to express and exchange ideas and opinions on the most important topics facing fashion today.