The French house is betting on a full-fledged entertainment strategy — including a scripted television series and music festival — to outmaneuver fashion’s power players.

The French house is betting on a full-fledged entertainment strategy — including a scripted television series and music festival — to outmaneuver fashion’s power players.

On Wednesday, Balmain presented its Spring/Summer 2022 collection at Paris Fashion Week, marking its first in-person fashion show since the pandemic’s start as well as creative director Olivier Rousteing’s 10th anniversary at the brand.

But this season, a return to the runway wasn’t enough. The fashion show — which featured supermodels like Naomi Campbell and Carla Bruni in an extensive collection of new designs as well as some of the brand’s mid-2010s hits — doubled as the second iteration of Balmain’s branded music festival, an event it first hosted in June 2019. This time, it featured performances from artists like Doja Cat, while a voiceover from Beyoncé broadcast over the crowd congratulated Rousteing for his work championing diversity and change in the fashion industry. Balmain sold 4,000 tickets to the public and invited 1,000 guests of the brand. Livestreamed on the Balmain website, the spectacle was available for all to enjoy.

It’s one part of Balmain’s approach to “democratising” its brand through big-ticket entertainment ventures. Balmain’s scripted television series, “Fracture,” is also part of this strategy. Produced with British broadcast network Channel Four, “Fracture” tells the story of a struggling musician, played by actress and musician Jessie Jo Stark, who confronts a troubled familial past while pursuing grand plans for her future, set in a seedy Los Angeles motel. Tommy Dorfman and Charles Melton, alumni of the shows “13 Reasons Why” and “Riverdale,” respectively, also make appearances. Rousteing helped cast and plot the series in addition to working on the costuming.

Both the festival and the series are part of an entertainment-focused marketing strategy that took shape over the course of the pandemic, as many fashion brands put the power of video content to the test. The hope is that the five-part series in particular can broaden consumer awareness and help Balmain recapture the kind of cultural relevance it enjoyed in the mid-2010s.

“Everything has been done in terms of traditional campaigns,” said Balmain chief marketing officer Txampi Diz. “What’s the next step? We believe that this is one option.”

In recent years, many fashion brands have ramped up their attempts to capitalise on the “Netflix revolution.” Gucci released film shorts with acclaimed director Gus van Sant on YouTube and its own channels in 2020, while in 2018, Kenzo tapped Milla Jovovich to star in a superhero-themed short film. Rihanna has teamed up with Amazon to stream her Savage X Fenty show three times since 2019.

Results have been mixed, however. Gucci’s project with Gus van Sant racked up a few million views on YouTube, while the Savage X Fenty shows drove significant online buzz and, in turn, sales.

Balmain’s strategy is different, said Diz, who believes that prioritising storytelling over product lends credibility to the brand’s content. (That’s not to say the clothes play no role: every character in the show is outfitted in full Balmain looks from the brand’s Pre-Fall and Fall/Winter 2021 collections, most of which are available for purchase.)

It’s a pointed attempt to reach new customers (specifically those between ages 20 and 35) that “don’t have Balmain top of mind… but we can, through this, surprise them and connect,” he said.

According to the brand, the series and supporting content have clocked up 4.6 million views on Channel Four, with the largest audience coming from the UK, followed by Brazil, Russia and Italy. The series attracted another two million views on platforms in the US and France, and four million views via China’s Tencent platform.

But the numbers are lower than the results racked up by some of Balmain’s past marketing successes. Take Zendaya’s appearance on the 2021 Venice Film Festival red carpet wearing a custom Balmain couture leather dress, which went viral online, amplified on Instagram by the reach of Zendaya’s 110 million followers. And the investment required for a red carpet appearance, however extravagant, is significantly less than the budget needed to produce a television series.

Still, a scripted series — and resulting marketing opportunities like campaign images shot on set and cast appearances at events — can do more to build long-term engagement than a single red carpet moment.

“People don’t like being sold to, but they love to buy, so, using a creative outlet to organically integrate your message is going to more likely resonate with consumers,” said Courtney Worthman, SVP of corporate development at branded entertainment partnerships firm Burns Entertainment.

More Than Just a TV Show

The stakes are high for Balmain, which has invested heavily in its entertainment strategy. 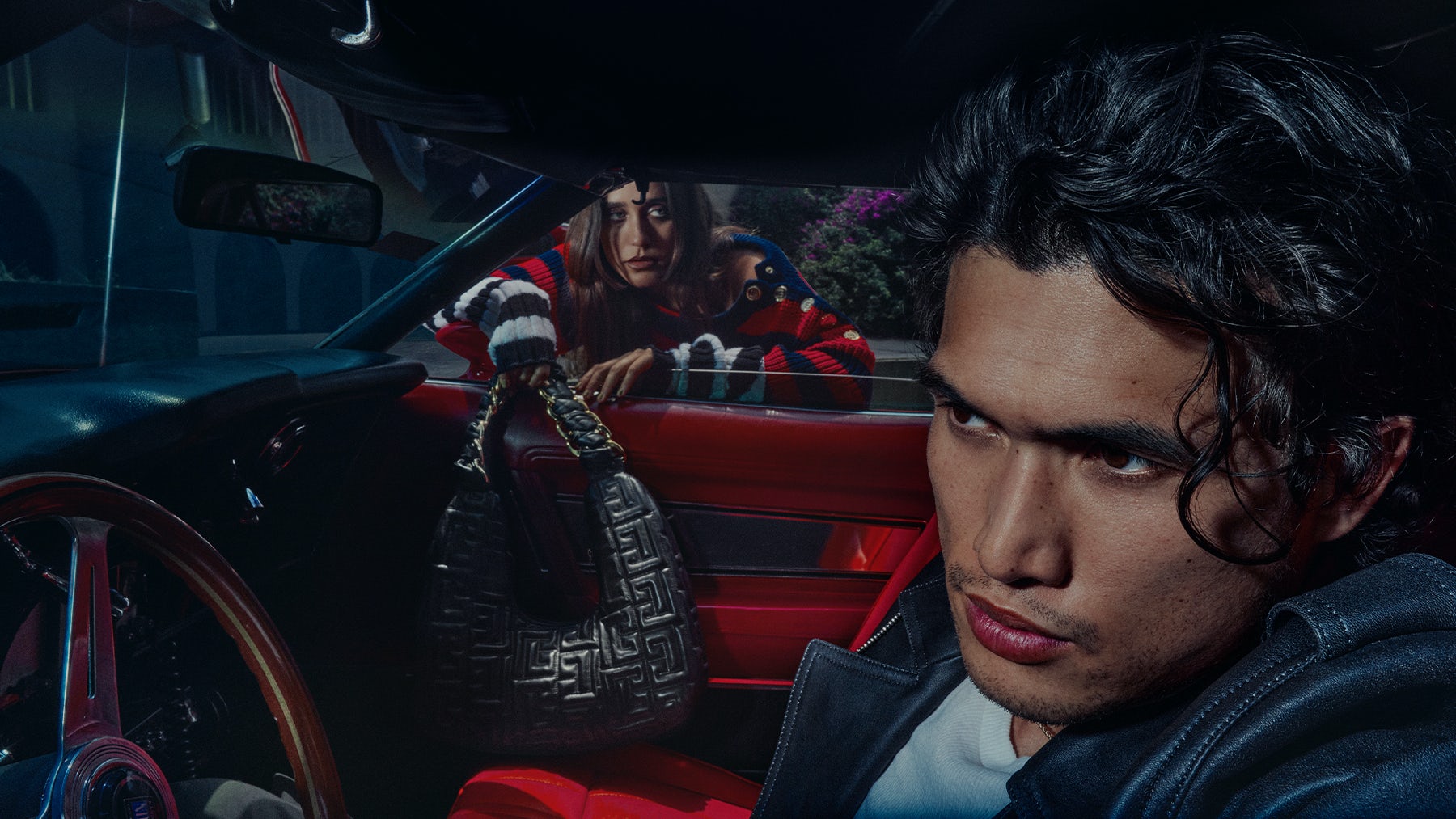 A campaign image shot while on set of the Balmain and Channel Four television series "Fractured," featuring the show's two primary characters. Courtesy.

Owned by Qatari investment fund Mayhoola, Balmain occupies a much smaller share of the market than LVMH- and Kering-owned luxury players like Louis Vuitton, Dior or Gucci. Mayhoola does not publish sales figures, but Mario Ortelli, managing partner of Ortelli & Co., said that Balmain’s relatively small size and weak digital infrastructure, plus its exposure to wholesale and focus on ready-to-wear, likely inflicted pain during the pandemic. In terms of online clout, Balmain ranked 18 of 20 on the Lyst Index of fashion’s hottest brands in the second quarter of 2021.

It was only a few years ago when Balmain mania was at its height, with phrases like “Balmain Army” commonplace on social media. Proximity to the Kardashians and Beyoncé and a successful collaboration with H&M helped keep the brand top-of-mind for consumers.

Between the series and the music festival, Balmain hopes to fully “integrate entertainment in every single aspect of the market and communication strategy” as part of a plan that has been in the works for four years, Diz said.

“It’s more about the experience and the lasting brand relationship that you can make when you’re on site at a festival or watching a show,” Wortham said of Balmain’s entertainment bets. “Maybe they’ll come away with lifelong consumers who originally just thought, ‘Oh I can’t afford this.’”

Taking Brand Building Off the Backburner

Rimowa Enlists Rihanna As the Brand Looks Beyond Suitcases