LOS ANGELES, United States — When designer Tamara Mellon founded her namesake line in 2013, she touted a “see now, buy now” model and even convinced multi-brand retailers to follow her seasonless schedule. But the experiment failed, and by 2015 the company announced that it would file for Chapter 11 bankruptcy protection in the United States in order to restructure.

That initial experiment turned out to be a textbook case of first-mover disadvantage. In the years since, the idea of selling in-season has swept the fashion industry, with nearly every big label making some attempt at the concept. It’s worked better for certain brands (Tommy Hilfiger) than others (Tom Ford), but “see now, buy now” is undoubtedly transforming high-end retail. Even Rihanna’s just-launched line with LVMH is instant fashion only.

Along with Donna Karan, who has sold her Urban Zen collection in this style for years, Mellon — who made her name at Jimmy Choo — perhaps doesn’t get as much trailblazing credit as she deserves. “The customer was ready, but the fashion industry wasn’t,” she told BoF in a recent interview.

Mellon persevered, though. And when she re-launched her namesake label out of Los Angeles in 2016 with Chief Executive Jill Layfield — her co-founder in the new venture — they pushed the rules of high fashion further by going entirely direct-to-consumer. Cutting out wholesale, as evidenced by the likes of Everlane and Warby Parker, allows brands to sell higher-quality items for lower prices without taking such a heavy hit on margins. (It also allows brands to control when they want to discount product.) But it’s a difficult thing to do without a large, established network of stores already in place. 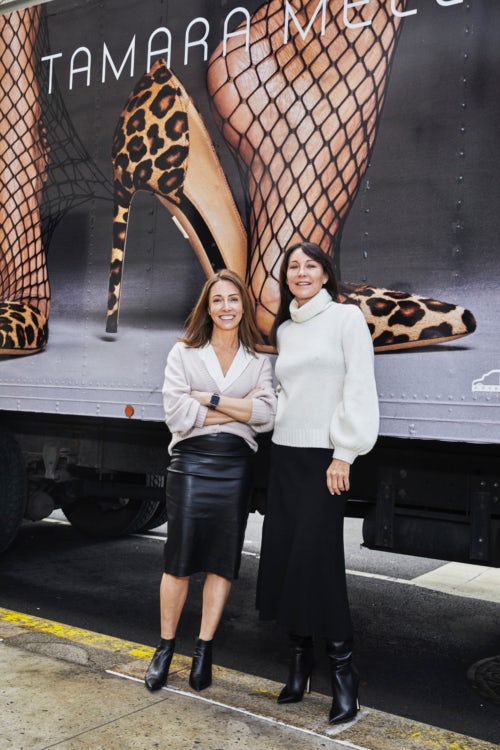 This go around, however, timing seems to be just right, with Mellon and Layfield’s bet on selling direct paying off. In 2018, year-over-year sales increased by 136 percent, with 36 percent of sales generated by repeat customers. Annual revenue was upward of $30 million, according to a source familiar with the company’s finances. And while Mellon and Layfield declined to disclose revenue figures or the company’s current valuation, they did say that they celebrated their first $1 million sales day in October 2018.

But their biggest “I told you so” moment may well be a new $50 million Series C funding round led by London-based firm Centricus, with participation from existing investors including Bay Area-based venture capital firms NEA and Quadrille, bringing the brand’s total raise to $87 million.

With this latest investment, Mellon and Layfield plan to expand internationally, open more physical retail stores — including five stores over the next year — and increase the venture’s headcount to approximately 60 people (from 40) by the end of 2019. Many of those hires will be in the data analytics department.

They will also make significant changes to the supply chain, manufacturing and logistics operations, working with their Italy-based suppliers — many of which Mellon formed relationships with while leading Jimmy Choo — to refine processes so that they can create more product on demand, more in line with their drops-driven, season-less model. The hope is that manufacturing upgrades will shrink working capital and increase cash flow by minimising leftover inventory, reducing the need for promotions and sales. While Layfield said that the company is unlikely to ever be “100 percent vertically integrated,” they are working to build facilities that manufacture Tamara Mellon product only.

Layfield said that she and Mellon did not set out to raise such a large round. However, they do intend for this to be their last venture-capital funding. (The next step, traditionally, would be to sell to a strategic partner, a private equity firm or to make an initial public offering.)

While the plan is to remain focused on accessories for now — in its previous iteration, the Tamara Mellon business was half clothes, half accessories — such investment implies a desire to scale quickly, which will require further spending on customer acquisition. The brand already allocates significant resources to developing marketing assets for different channels and customer bases, with nearly half of the corporate office’s current employees sitting in the marketing department. However, Layfield said that customer acquisition costs are decreasing as the repeat-customer business picks up.

“Customer acquisition is without a doubt the hardest thing for a direct-to-consumer business,” Layfield said, adding that the brand uses a four-pronged strategy that includes channel optimisation, test-and-learn experimentation, offline marketing and community building. (Sometimes, the team sends free shoes not to influencers or celebrities, but to interesting women they read about in the news or find on their community pages.)

And while Tamara Mellon prices are significantly higher than those of most direct-to-consumer shoe brands scaling fast right now, the duo say that price resistance has not been an issue because they have communicated why the shoes cost what they do. (The average order value is $600.) “The customer understands the markup system,” Mellon said.

Centricus, their lead investor, was sold on their commitment to innovating the fashion business model. Best known for advising on Japanese telecom group Softbank’s $100 billion Vision Fund, the London-based firm has recently moved further into lifestyle and product, taking a minority stake in fashion label Hussein Chalayan in January 2018 and acquiring Italian resort Capri Palace in May 2019.

In an interview, Centricus’ Nizar al-Bassam said that Mellon and Layfield’s technology vision, combined with their novel approach to physical retail, gave him and co-founder Dalinc Ariburnu the confidence that the brand would be able to scale further. Tamara Mellon’s first retail store, which opened in Los Angeles’ Pacific Palisades Village last year, is laid out quite differently than the typical, with every size and ever style readily available in displays so that customers don’t have to interact with salespeople — unless they want to. It may sound like a small thing, but it has helped push the store into profitability, with sales per-square-foot north of $3,000.

“When we sat down with Tamara, Jill and their management team, that disruption just jumped out,” Al-Bassam said. “We bought the store concept, believed in the story and liked the combination of Jill’s and Tamara’s backgrounds.”

Mellon famously co-founded the Jimmy Choo brand, exiting in 2011 when private equity firm TowerBrook Capital Partners sold it to now-defunct group Labelux for $800 million. Labelux in turn sold it to Michael Kors, now known as Capri Holdings, for $1.2 billion. Before partnering with Mellon, Layfield was chief executive of outdoor recreation retailer Backcountry.com, which she took from $30 million to $500 million in annual sales over the course of a decade.

As for Mellon and Layfield, the goal is to be profitable by 2021. “It’s very hard for businesses that are not big data companies to raise money,” Layfield said. “The lesson here is, if you want to be able to raise money and you’re building a fashion business, find authentic opportunities to innovate using data. Figure out where there are opportunities beyond just great product and a great brand.”